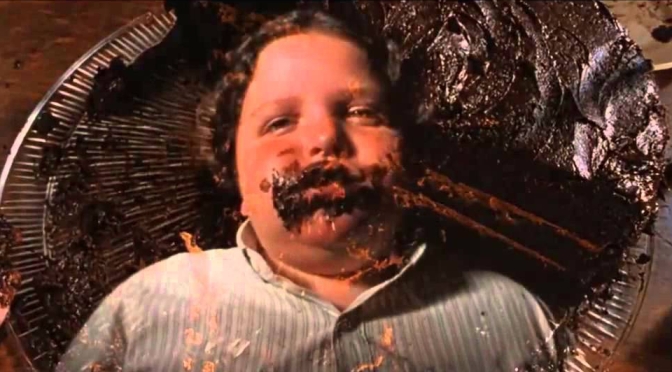 It’s Chocolate Week! A prospect so deliciously scrumptious that it’s actually the second Chocolate Week of the year…ssh, don’t tell anyone!

From Forrest Gump’s life motto to Lasse Hallström’s Chocolat, the cinema has reflected our love affair with the sweet stuff to mouthwatering effect.

On the other hand, it’s also done its utmost to put chocoholics off for life – the horror! Check these scenes out at your own risk…

In one sadistic act of food torture, this is the scene where the evil Miss Trunchball forces Bruce to eat an entire chocolate cake in front of the whole school. We all like a bit of chocolate cake, sure, but by the end of this scene…let’s just say you’ll pass for now.

Mamma Mia ain’t got nothing on Ken Russell’s fantasy tribute to The Who when it comes to delirium. You’re best watching this rather chocolatey indulgence scene with no introduction…

Bryce Dallas Howard is truly horrendous (great acting, awful character) as Miss Hilly in The Help and, thus, gets her just desserts in this chocolate-pie-based revenge sequence. Clue: there’s a secret ingredient! You will never trust chocolate pie again and may wish to vomit…

4. Augustus Gloop goes up the shoot – Willy Wonka and the Chocolate Factory (1971)

As a child, Roald Dahl was fortunate enough to get the job of taste-testing chocolate. Why, you might then ask, did he seems so determined to put us off? Here’s another of his adaptations that sees things go a little wrong in the Chocolate Factory.

Fair play to Joey wanting to share his chocolate but it’s not something you’ll ever want to do again… (As if you want to share your chocolate anyway?!)

3 thoughts on “5 film scenes that will put you off chocolate for life!”