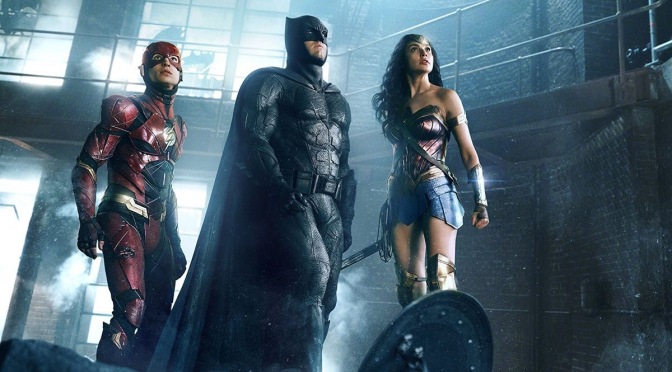 The journey to Justice League has been a gruelling one. Those who complained that Batman v Superman required bums of steal to experience from start to finish, know nothing of endurance the film has had to muster, having first entered production back in 2007. A decade of ‘development Gotham City’ plus one mixed bag of preluding offerings later, and the final product…isn’t bad. No, it’s not great – far too messy, a tad soulless – but it has got plenty of promise. There’s a start.

When we last crawled out of the DCEU, Superman (Henry Cavill) had just popped his clogs and Bruce ‘Batman’ Wayne (Ben Affleck) was wandering around a graveyard, with Diana ‘Wonder Woman’ Prince, muttering something about forming a team. Justice League might pick up some time later but the world is still very much in mourning for its Kryptonian hero, whilst Wayne is still without a team: ‘I need warriors’. Whrn Themyscira, island home to the more-sparsely-dressed-than-last-time Amazons, is attacked by a stony-faced, ace-wielding, horned nemesis and robbed of the ‘motherbox’, which has been kept safe there for centuries, bringing the band together is no longer a choice.

To call this coherent might be a stretch but Chris Terrio’s script – with Joss Whedon shaped tweaks – is actually surprisingly straightforward. Much like 2012’s Avengers Assemble, it all boils down pretty neatly to: bad guy wants bad thing and one hero acting alone just won’t cut the mustard. For the Avengers the MacGuffin was an infinity stone lodged in the Tesseract, for the League it’s three boxes, scattered across the planet but the end game’s the same. Build characters, destroy buildings.

With finale suggestion that there’re more to come, the newbies here are a decent enough set. Ezra Miller gets the best lot as the Flash – ‘My specialist skills include viola’ – predominantly due to a framing subplot with his imprisoned father, whilst Jason Mamoa’s Aquaman brings the cool and Ray Fisher’s Cyborg brings a hoody. None of them are ever quite the breath of fresh air that Gal Gadot was for Batman v Superman but it’s not for want of effort. The main problem is a sense that every character, bar Diana, suffers from a lack of depth, instead making for superficial company. Momoa gets one, brief scene of submarine backstory whilst Fisher hasn’t yet the charisma to sell his grim origin tale, instead coming off as something of a brood for a good two thirds of the film. Both fair better in an admirably uplifting final act.

Given a shiny new suit and tease of personality, it’s a re-written Superman that ups the engagement as the ending nears. With a wink and a smile, if not yet a heart, he sweeps into play as though simply having a laugh. Do try not to focus on how evident it is that he alone could handle this film, rendering the League and preceding hour and a half irrelevant.

The flaws that persistently dominate every DC film of recent years remain, of course, and continue to hold the ever-expanding franchise back. Computer generated effects overwhelm the screen and look so blatantly artificial that this will never feel remotely real, never mind ever attain a viewer’s whole engagement. The best effect here is probably the nifty work that sees Henry Cavill’s contractually grown Mission Impossible moustache removed from $25m reshoots. On the other end of the scale, meanwhile, would be poor Ciarán Hinds; the latest in a long line of good actors smothered with motion capture nonsense. As Steppenwolf, Hinds is painful: ‘I am the end of the world, who are you to defy me’ painful; a veritable splutter of risibility, who is genuinely overshadowed by his army of, occasionally effective, Parademons.

Justice League isn’t the finished article, it’s far from it. On the other hand, it’s leaps and bounds above the likes of Suicide Squad. What Snyder and co. have here are the parts and tools to make something greater – it just needs assembling.