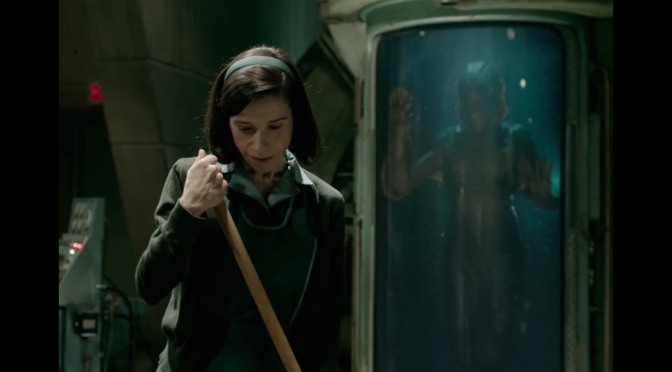 If ever a film could be said to woo it’s The Shape of Water, Guillermo del Toro’s enchanting, daring, beautiful and breathtaking tale of aquatic love. Delightfully scored and gorgeously designed, this is a package of perfect cinematic harmony and a masterpiece in which no emotion is left unscathed.

The vocabulary of fairytales has long found voice in Del Toro’s oeuvre, most startlingly in Pan’sLabyrinth, and sings once more in his latest. Beauty and the Beast, The Little Mermaid and The Ugly Duckling are all fertile ground for The Shape of Water, a film which taps too into a history of cinema itself, elevating this seventh art to the echelons of fairytale tradition. Most prominently referenced is Jack Arnold’s fifties monster-movie: Creature from the Black Lagoon, to which this owes plot, dialogue and themes. Del Toro has, indeed, said as much in presenting his film as both tribute and rectification; here dreams do come true and love can conquer all, whilst the nature of monstrosity itself is questioned.

Housed above a Baltimore cinema, Elisa Esposito (Sally Hawkins) feels herself to be incomplete. She is a cleaner at a top-secret government facility in Cold War America and has just two friends in the world: her down-on-his-luck neighbour Giles (Richard Jenkins) and colleague Zelda (Octavia Spencer). Giles is an artist, illustrating for advertisements and struggling with his homosexual identity in an unfriendly world; Zelda a chatterbox chained to a husband who offers little in return. Yet, it is not isolation that sets Elisa apart; no, her fatal flaw is that she has no voice – having been abandoned as a baby and found with mysterious scars upon her neck – and may communicate only through sign language and only to those who understand it.

When Colonel Richard Strickland (Michael Shannon) returns from South America, it is proclaimed that he has brought with him: ‘the most sensitive asset ever to be housed in the facility’ – an amphibious humanoid (a creature from some black lagoon) of hitherto undiscovered origin and unknown ability. Asked to clean the creature’s storage unit, Elisa finds herself developing an intimate bond with it, or perhaps him, over a shared love of music and correspondent inability to conventionally communicate.

A film about the nature of segregation and abuse, The Shape of Water is a celebration of difference and champion of quirky harmony. The perfect cast are rewarded with the perfect script, a co-write of Del Toro and Vanessa Taylor, whilst Alexandre Desplat’s Parisian score, reminiscent of Amélie, floats effortlessly in tune with wonderfully marine-hued cinematography from Dan Laustsen. So unified is the film’s production that one might call it: a total work of art.

Such episodes of dreamlike ecstasy, musically choreographed sequences of everyday life, are heightened in pleasure, however, only by cruel juxtaposition to darker undercurrents. Torture scenes verge on the gruesome, whilst an angular Shannon presents a vile counterpose to the meek Elisa, declaring, on losing two fingers to the creature: ‘I’ve still got my thumb, my trigger finger and my pussy finger’. Early dialogue is but a foreboding sign of the horror to come and, again, oceanic metaphor pervades with the terror notes of Jaws.

More so than Del Toro’s earlier work, perhaps, The Shape of Water is a distinctly adult fairytale. Of course, that is not to say that the likes of Crimson Peak were for children but rather that the threat is more earthly here and grounded maturer horror. Whilst narration names Elisa: ‘the princess without voice’, she is an entirely sexual being and no simple heroine, being infused with powerful depth by a phenomenal Sally Hawkins.

Overwhelming on every level, The Shape of Water delivers pure romance and deeply resonant emotion. It is a feature destined to go down in history; even those who do not see it will know of it.

13 thoughts on “The Shape of Water | Review”