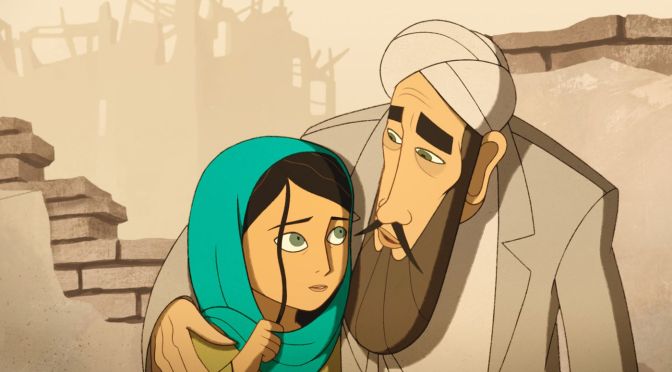 Angelina Jolie’s new film is a rather under-the-radar affair but may well be the one she is most proud of. Based on the first book in a series by writer Deborah Ellis, The Breadwinner comes from Irish director Nora Twomey and the ever-rising Cartoon Saloon studio. They’re the unit behind The Secret of Kells and Song of the Sea but have journeyed further afield this time around. Jolie is its executive producer.

Specifically, The Breadwinner is set in Taliban-controlled Kabul. Saara Chaurdry voices 11-year-old Parvana, who, as the film opens, is an Afghan street seller with her father Nurullah (Ali Badshah). Except, she shouldn’t be there. Not according to the rules of the land, in any case – which stress that women should remain at home, should be covered and should be married. With red fabric providing the only vibrancy to a bleak slumscape, it is no wonder that Nurullah has instilled in his family a passion for storytelling. ‘Stories,’ he tells Parvana, ‘remain in our hearts even when all else is gone’.

Parvana’s frightening world becomes a dangerous one when her father is dragged off to prison by Islamist extremists and her mother is cruelly beaten. As market traders will not sell to women, this is a death sentence and it is only when Parvana is disguised as a boy – short hair and her heavily absent brother’s old clothes – that the world opens: ‘When you’re a boy, you can go anywhere you like.’

The Breadwinner may be set at the turn of the century but it remains sadly contemporary. This may be a children’s film but it offers yet more proof of the vital role of animation in broaching harsh realities to innocent eyes.

It is not just trauma, however, that the film handles with skill. Coming from the Cartoon Saloon niche of Celtic tales, Tworney infuses reality with gorgeously animated chapters from ancient stories. These are elegiac yarns of heroes and monsters that parallel the present, whilst sensitively exploring a rich culture that is too often swept beneath successive wars, revolutions and conflicts.

Whereas Parvana’s journey is illustrated with a gentle simplicity – one in which precisely executed lines express age and emotion effortlessly – her stories sparkle in an abstract glory that mixes the studio’s earlier work with flavoursome hints of arabesque and Islamic art. Repeating floral forms spiral and ungulate, leaving fact in the cold shadow of fiction.

Similarly Eastward gazing is the velveteen music of Canadian composers Jeff and Mychael Danna. It’s expressive work, bringing sentiment, compassion and wariness to more fantastical elements together across its instrumental range. Neither authentic nor appropriation, the score’s strength is its own identity. Much, indeed, like the film it orchestrates.

Echoes of past and future wars loom over Kabul throughout, all rising to a thrilling final act. This is not a loud and energetic film, however. The Breadwinner is tender, beautiful and heartbreaking – essential viewing, to put it simply.

6 thoughts on “The Breadwinner | Review”