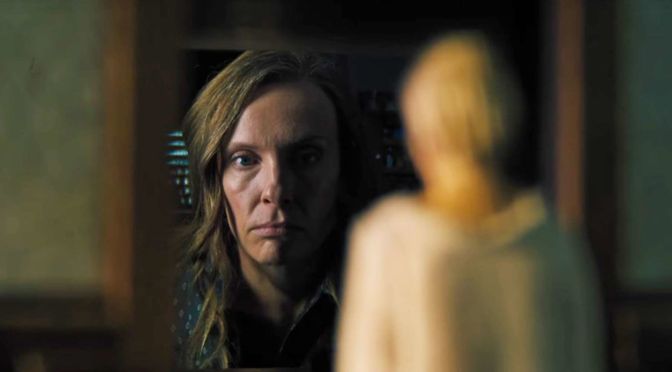 Ari Aster deals audiences a traumatising hand with Hereditary, each card an ace. It is relentless, emotional, frightening, raw and adjectival beyond describable satisfaction. Immensely deferential to those giants of horror cinema that came before, this one sits among them thanks to the combined mastery of its direction, performances and breathtaking audio-visual aesthetic. Be afraid…and some.

In a barnstorming central role, Toni Collette gives her all to the role of Annie Graham – wife of Steve (Gabriel Byrne), mother of Peter (Alex Wolff) and Charlie (Milly Shapiro) – a miniaturist grieving the recent loss of her previously estranged mother. Except, grieving isn’t quite the right word; ‘should I be sadder?’ she asks her husband after the funeral. Peter too is surprisingly unaffected by the loss, having been denied access to his grandmother as a child, leaving only twelve year old Charlie to truly mourn.

We soon learn that Annie’s mother was a difficult, intensely private woman, whose unhealthy attachment to Charlie saw her breastfeed the girl as a baby. In her final years, the matriarch came to live with her daughter but was detached and deranged. Mental health conditions are said to be hereditary in the family and their house bleeds through unspoken fractures, full of suppressed secrets threatening to erupt. As Anne screams midway through one climactic dispute: ‘Nobody admits anything they’ve done!’ Aster presents his film as a family drama, which it very much is, but an air of disturbia is present from the very first scenes.

It helps that Colin Stetson’s score, apparently inspired by the composer’s own nocturnal wanderings, is a real ritualistic knockout. Few shots in the film escape the throbbing chills of his electronically synthesised soundscape, with even mundane slices of reality elevated to levels of cruel discomfort long before shadows are rendered deadly and creepy crawlies begin to emerge. When a first act twist hurls the action into a thrilling new direction, Stetson rises to the challenge of ensuring that at no point does the film lose its cinematic intensity and dramatic integrity. Frankly, it’s no wonder that Aster came to think of his film’s music as a character in its own right.

It is after Annie attends a bereavement support group and meets Joan (American Animals’ Ann Dowd) that trauma becomes terror, with the latter introducing the former to a particularly effective means of communicating with the dead. To reveal any more of the plot, or even suggest Aster’s likely influences, would be to rob unsuspecting audiences of the brutal awakening that comes with a blind experience of the film.

Repeat viewings are the place for analysis and to determine whether you really did see THAT in the background. Brilliant work by production designer Grace Yun and set decorator Brian Lives combines with the film’s few post-production additions to gift frames that crawl right under the skin and into the head. Mine emerged feeling thoroughly messed with. Wait, did someone just blow smoke back AT him?

Beyond it’s base shock value, Hereditary also warrants acclaim for the high quality technical achievements. Deceptively simple tricks are pulled off with aplomb, sitting aside a number of larger, brilliantly choreographed, set pieces. Seamless editing flourishes include a transition from one character’s scream to a telephone dialling tone on the same register and the moment the camera enters Annie’s miniature model of their home, which then becomes the real thing. In reverse, Aster shoots the house itself in a fashion that almost makes it seem like it is still the miniature, with the family within mere dolls to the manoeuvring of some external force. Fate’s a devious thing in this world.

An instant classic, Hereditary is both dream and nightmare in one. Phenomenal.