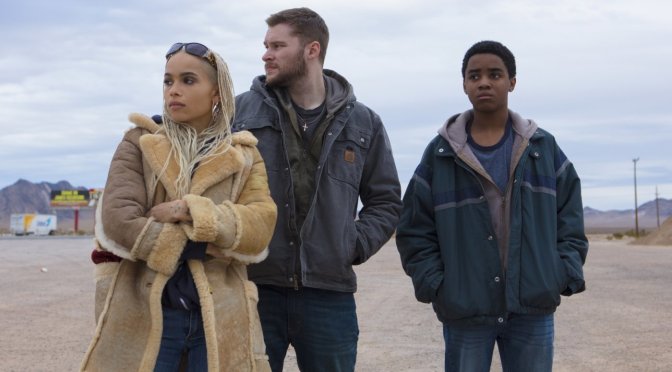 Which came first: the short film or the feature? Either way, there’s a grander scheme to Jonathan and Josh Baker’s directorial debut than can be contained within either a fourteen nor hundred minute runtime. Based on the brothers’ own 2014 mini movie Bag Man, Kin expands the mythos of that first outing by answering and posing questions along the way. While a box office drubbing for the film stateside makes further exploration of the story unlikely, a future here isn’t an entirely unwelcome prospect.

Lionsgate re-released Bag Man to online audiences in the run up to Kin, which itself was declared to come from the producers of Arrival and ‘Stranger Things’. On watching the film, the influences of all three are tangible but Kin is closest in tone and structure to Jeff Nichols’ outstanding Midnight Special and Michael Rae’s godawful Laserblast – in terms of quality, this one’s ‘Daylight Average’ and somewhere in the middle. Whereas Bag Man withheld the inners of its protagonists’ duffle bag until a startling climax, the Bakers have no such reserve in their long form conversion. Besides, the A-list twist on the end of this one makes its parent’s shocker seem somewhat tame.

Daniel Casey is behind the film’s script, working closely with his directors, to flesh out bare but already effective bones. Newcomer Myles Truitt proves to be an exceptional casting coup for the production as wide-eyed twelve-year-old Elijah Solinski, a black adoptee to a white couple. Having died just prior to the film’s opening, Eli’s mother is rather neglected as an absent presence, whilst his father (Dennis Quaid’s Hal) is offed early too. This is a film that more concerned with fraternity than parental guidance. Sing Street’s Jack Reynor brings the easy charm that propelled Chris Pratt to success in the role of Eli’s brother Jimmy. It is his return from a six year prison sentence that gets the plot moving, albeit only after Eli has stumbled across the warehouse wreckage of a recent, perhaps extraterrestrial, battle. The weapon he collects there is much like that of Bag Man and does little to disprove Chekhov.

Having amassed a debt of $60,000 to crime lord Taylor Balik (James Franco), Jimmy is driven to drastic measures to break even. When his last ditch plan backfires horribly, however, he’s forced on the run and to take Eli with him: ‘Look, you want to go on an adventure or you want to do chores?’ As a buddy road movie, Kin is too sombre and cliched – Zoë Kravitz plays a kind hearted stripper who wants out of her club – for its own good but is nonetheless touching and admittedly well paced. Not only are our heroes on the run from felons but there are mysterious, masked aliens on their trail too, tracking down the sci-fi WMD Jimmy found in the aforementioned warehouse. A nod to James Cameron’s Terminator 2 offers an early clue to where it’s all going but there are twists enough to surprise.

Ultimately, though, it is the visuals that save Kin. The Bakers’ extraneous plotting and weak characterisations might undermine their relatable familial values but Swiss Army Man’s Larkin Seiple is always on hand to deliver terrific photographic vistas. His luminescent strip club scene proves a particular highlight. Whilst the penultimate line of the film may be ‘We’re not done’, the film’s failure to set the box office alight suggests otherwise; the greatest success here is that this is – just about – disappointing news.

One thought on “Kin | Review”