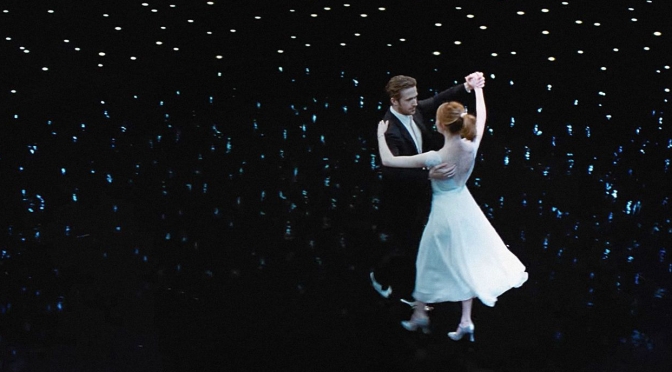 Ah, Hollywood! The magic, the romance, the city of angels: Los Angeles. Secretly we all know that Hollywood’s not a real place. Hollywood’s a dream and creative ideal combined and it’s a world captured picture-perfectly by Damien Chazelle’s first work since his Oscar-winning Whiplash from 2014. La La Land tells the tale of aspiring starlet Mia (Emma Stone) and jazz wannabe Sebastian (Ryan Gosling) in an all singing, all dancing tribute to those cockle-warming classics of the mid-twentieth century.

The film pitches itself in the vein of Jacques Demy’s The Umbrellas of Cherbourg nodding also to Singing in the Rain, Casablanca, Sunset Boulevard and more. As the latter so tragically portrayed in 1950, the real La La Land makes and breaks dreams with indifference. Stone’s Mia starts out in Winter – the film spans the seasons of a year with a witty display of the consistency of LA’s sunny vistas (‘Another Day in the Sun’) – as a barista drowned in auditions. Every audition is the same – a room of ‘people like me but prettier and better’ – and each a rejection for Mia in a very-knowing montage of upsets.

On casting Stone and Gosling, Chazelle asked the pair to recall their worst auditions and many of these make the cut offering a gentle reminder of the cold business that is show. It is very telling that Chazelle first proposed the film back in 2010 but refused to continue it in light of numerous soul-killing demands from doubting investors. Sebastian’s a true-to-jazz man and wants faith for his art over bowing to commerce – remind of anyone? – but La La Land is an exploré of the realities of this. Yes, it’s glamorous and magical and bursting into song in the middle of a traffic jam (the opening number’s a joyous treat); it’s ‘very very exciting’ and it’s also brutal.

Going from the tonally bleak Whiplash to broadway-via-Hollywood in La La Land on paper seems on odd leap but much is easily translated. Chazelle is a musician and here he’s no mere director. La La Land finds him as conductor, allowing swathes of the film to be told purely though orchestra, with Dziga Vertov’s The Man with a Movie Camera another clear influence. As in Whiplash, La La Land explores the duality of dreams and reality, your art and your business, your career and your life. Sebastian and Mia are a classic couple but must choose between love and success.

Miles Teller was almost cast in Gosling’s role but it was a wise choice to switch. Whereas Whiplash saw Teller’s Andrew fighting arrogance, blood and J K Simmons, Gosling’s Sebastian is more gentile. He fights resignation, modernity and, in a cleverly ironic cameo, J K Simmons. Gosling and Stone have a fizzing chemistry in their third film together and give grace to a charming soundtrack by Justin Hurwitz. At any given time they are Fred and Ginge, they’re Tracy and Hepburn, they’re Clarke Gable and Claudette Colbert a la It Happened One Night. You so want to see the pair together that the initial rebuttal is affecting whilst subsequent ups and downs toy with you and brittle emotions.

One dismissible niggle I had with La La Land was that its dizzying heights are so tremendously high that quieter patches feel a touch plain, exposing a well-trodden plot. Those familiar with Chazelle’s inspirations won’t find the direction taken wholly surprising. Through these moments you may find yourself waiting for the next hopelessly romantic waltz among the stars, the next rendition of the lovely City of Stars, the next scene to send you to delirium. A bold opening involves a six minute single shot performance on a closed-off LA highway. Such marvellous cinematography reminds almost of Disney’s Fantasia in its paring of colour and music within fairytale vignettes.

Toned in pinks and blues the most prominent source of reference though is again Demy’s Cherbourg. The razzmatazz of Demy’s showcase overture and sketches verve through many of La La Land‘s orchestral motifs. Similarly there’s a studio-era feel to exterior scenes; one of these directly recalling Singing in the Rain‘s ‘You Were Meant for Me’ studio routine. Mandy Moore’s superb choreography does as good a job at transforming her novice leads into dancers as Tom Cross did in convincing Teller as drummer.

These many debts that La La Land owes to its predecessors work due to Chazelle being ever conscious of the film’s 21st Century setting. The old fashioned sentiments never feel dated, treading well the lines of timelessness and modern. Fire alarms, text tones and Prius Hybrids are very much here and now and often imbued with significance. Sebastian, for instance, drives a 1982 Buick Rivera Convertible which compliments his outdated and impractical characterisation perfectly.

Like the anti-Les Miserablés La La Land is a wash of dreamy optimism and charm yet never letting go of a sense for the real world. Whilst effortlessly uplifting, sadness dwells beneath the sheen understating the pressures of ‘The technicolour world made out of music and machine’. Chazelle mourns but accepts the skeletons of time. You can’t have everything and the promise of Hollywood is as fantastical as the film’s choreography. Les Musicalés indeed – a modern/vintage classic!