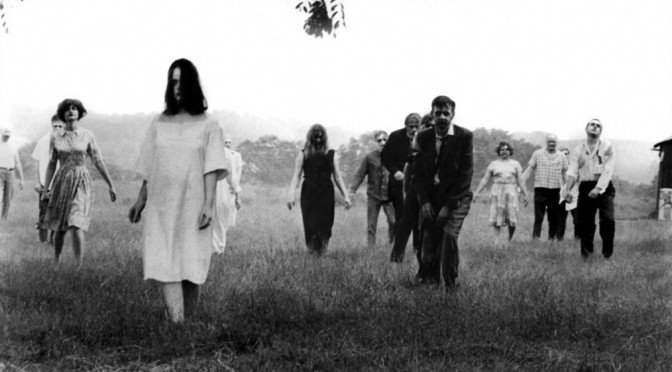 Avoid graveyards and arm yourself, day thirteen is unlucky for Johnny…it’s Night of the Living Dead.

Zombies weren’t yet zombies when George A. Romero reanimated the Pennsylvanian dead in 1968. Not as the then commercial director new them at any rate. Back then, no one made movies in Pittsburgh and, in the event of a possibly imminent apocalypse, it was unknown that the solution was to shoot the undead flesh eaters in the head. Lesson learnt.

Much has been written on Night of the Living Dead’s many contributions to wider cinema. Featured here for the first time, or there abouts, were an African-American protagonist, catatonic heroine and vast array of monstrous baddies who seek nothing more than to feast on human flesh. Swathes of the film are told through vicious montages that are devoid of dialogue, while Romero’s script itself, co-written with John Russo, revels in the quickly established premise that no character here is guaranteed to survive. In yet one more inspired move, the film’s focus on a contained event is compressed by the hints and discussions of a much larger night of terror beyond the frame. There is no escaping the living dead or the political shifts they represent.

This proves to be a costly discovery by Barbra (Judith O’Dea) and Johnny (Russell Streiner, uncredited) within mere minutes of the film’s inaugural shot. Whilst visiting their father’s grave, the brother and sister are attacked by a spindly, lumbering figure who we later learn is just one in an army of the undead presently slaughtering their way across the east coast of America. She gets away, he doesn’t. Although she benefits from the protection of the level-headed, resourceful Ben (Duane Jones), Barbra never recovers.

Contrary to the brutalism of the film’s opening – and, indeed, closing – scenes, for the most part, Romero’s budget classic draws fear from dread and the psychological despair of an isolated group who have every reason to believe they won’t survive the rising threat. Throughout it all, a stream of news trickles ominously from the radio and television. Outside, meanwhile, stupefied figures stalk closer and closer to a soundtrack of birdsong and radiophonic waves.

At first glance, Night of the Living Dead has the visual distinction of a much older film. Except, the decisions to shoot in a grainy black and white, on 35mm and to a 1:37:1 ratio were all very much the constraints of budget limitations. The brilliant irony is that, whilst the producers bemoaned that their film would not have the lush look of the classic horror films that inspired them, the final piece gained something better in visceral atmosphere.

With its employment of largely improvised dialogue, Night of the Living Dead manages to assume a strikingly realist aesthetic, much assisted by Romero’s scrappy directorial approach. Intentional or not, the film frequently has the air of a particularly artful documentary. There is certainly something about the first attack sequence that engineers a genuinely perilous effect. Likewise, the bitter interactions and divisions of humanity’s final septet ring very true: ‘We may not enjoy living together but dying together isn’t going to solve anything.’ Government corruption, socio-familial disintegration and isolationism are the core themes here.

The conservative backlash that met the film’s original release, paired with its ongoing reputation as ‘the first zombie feature’ – which it wasn’t in any case – do no favours to the longevity of Night of the Living Dead. When the film was selected by the Library of Congress for preservation in America’s National Film Registry, its horror pedigree mattered not nearly so much as the insightful social commentary that gave Romero his meat.

One thought on “Night of the Living Dead | Review”