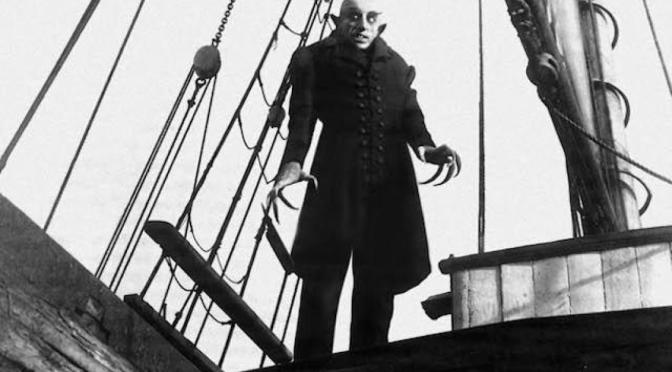 Day twenty-five is definitely not Dracula. Not that the Stoker’s were convinced.

This one has a confusing legacy. Contrary to common belief, F. W. Murnau’s Nosferatu is neither a Dracula film – never mind the first Dracula film – nor work of German Expressionism. Not exactly. Hints of both pervade the film, certainly, but this masterpiece of silent cinema is never so clear cut. Further still, it took two decades for the film to really make its international mark.

Producer and designer Albin Grau had intended Nosferatu to be an adaptation of the Bram Stoker classic but tweaked the plot and changed the names on failing to secure the rights – a naive move that led to a lengthy legal battle. Here, it is Count Orlok who stalks Transylvania and he who sails to the town of Wisborg, rather than Whitby. For what it’s worth, Nosferatu did manage to imprint itself on vampire lore by adding the conceit that sunlight is fatal to the fanged assassins.

Subtitled: ‘A Symphony of Horror’, the film opens with estate agent Thomas Hutter (Gustav von Wangenheim), husband of Ellen (Greta Schröder) being ordered to visit his firm’s mysterious new client, who seeks to buy a new home for himself in Wisborg. This is Count Orlok, the spindly, hunched and feral ‘Nosferatu’ – which comes from the German for ‘plague bringer’ – of the Carpathian Mountains, played brilliantly by Max Schreck. Unlike the grandiloquent Dracula’s of Christopher Lee and Gary Oldman, Schrek’s Orlok moves in animalistic jitters; he has taloned figures, bat-like ears, a bald head and an extraordinary nose. When his eyes flair, he chills to this day. Grau’s creation, knock off or not, is a chef d’oeuvre of fearsome design.

It is not just in its antagonist that the film displays ingenuity however. Murnau – whose later film Sunrise would go on to win three of the first ever Academy Awards – demonstrates here an exceptional eye for the gothic and frames a handful of incredible and iconic shots in lieu with Grau’s ingenious deployment of chiaroscuro. As threats close in on Hutter, Murnau smartly boxes the increasingly aghast man within arches and the looming enclosure of a post-production vignette. Later, the sequence that sees Orlok arrive in Wisborg is exceptionally well realised.

Nowadays, it is all too easy to dismiss the effects work of Nosferatu as standard cinematic fare, when, in reality, this was a production at the avant-garde of motion pictures as it was made. Stop motion is employed in the scrappy trickster fashion of Méliès, the parallel editing of Griffiths is quadrupled, and a ghostly carriage ride is heightened by Murnau halving the frame rate of his footage and using a negative reel for ghoulish, cerebral effect. Smart scripting by Henrik Galeen keeps things flowing between the effects, through deliciously complex storytelling.

Florence Balcombe, the financially crippled widow of Bram Stoker, bankrupted the production company behind Nosferatu in her vengeance and ploy for compensation, before attempting to have every known copy of the film destroyed. Thankfully, art became reality when prints rose back from the apparent grave.