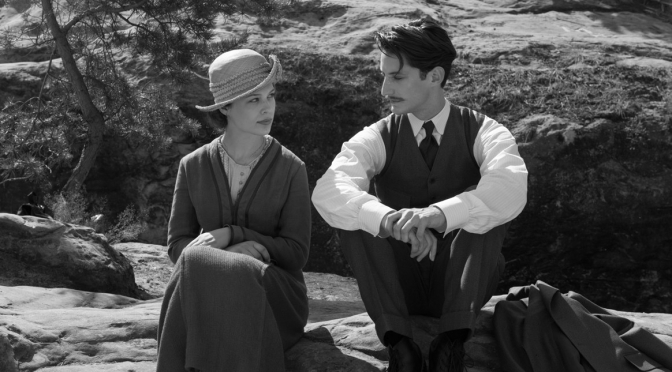 When the grieving fiancé (Paula Beer) of a German First World War casualty visits her beloved’s grave in 1919, the sight of a veteran French survivor (Pierre Niney) laying flowers upon it is the last thing she might expect but the first which she meets. Inspired by Ernst Lubitsch’s 1932 film Broken Lullaby, itself based on Maurice Rostand’s ‘L’homme due j’ai tué’ play of two years earlier, such is the set up to François Ozon’s César award-winning Frantz, a heartbreaking tale of love, loss and lies, intertwined with intrigue.

This veteran of the allies, Adrien, is an unwelcome presence in the Deutsche town of Quedlinburg, home to the woman, Anna, and a community in which despair is being replaced by the burgeoning resentment and xenophobia that will go on to enable the rise of the Nazis and the arrival of a second, destructive, world war. Anna lives with her would’ve been parents-in-law, Doktor and Magda Hoffmeister (Ernst Stötzner and Marie Gruber), and has all but lost faith in life. When Adrien reveals a connection to Anna’s deceased fiancé, Frantz, however, the two bond over their shared sense of mourning, with the Hoffmeister’s gradually coming to accept him into their household, overcoming their prejudiced anger to find consolation in memories. But beneath Adrien’s exterior is a deep-lying torment and it seems clear that there is more to the Frenchman than meets the eye.

Classical in composition, Frantz in many ways odes its film heritage. Beats of Hitchcockian framing and intrigue thrum through the film, graveyard and gallery scenes particularly recalling Vertigo, whilst there’s more than a touch of David Lean’s Brief Encounter. From more recent stock, Saul Dibb’s Suite Française comes to mind as having explored similarly war-fractured relationships and socially forbidden love. An interwar story of romance that it is, Frantz is entirely and knowingly a work of cinema first and foremost. With melodramatic proficiency, twists and turns expose webs of well-meant lies, whilst Ozon is ceaselessly astute to opportunities in allowing time for beautiful scene setting. A key feature of the film’s cinematography being the fluidity with which its chromatics move between a greyscale and colour palette, in one breath-taking moment Adrien and Anna enter a cave as black and white silhouettes and emerge in a wash of emerald, spring greens.

Ozon’s is a well-cast ensemble, with rising star Beer a stand out. Plaudits too for the bilingual script – by the director and Philippe Piazzo – which delivers a delicate and lyrical quality in quiet moments and with lines like ‘Danke für deine Tränen und die Blumen auf seinem Grab’ (‘Thank you for your tears and the flowers on his grave’). Philippe Rombi’s score too is perfectly deployed, and with enough restraint to allow much of the diegesis to emerge from natural gushes of wind and pattering footsteps. This sense for musicality is borne out in the plot itself as dance and performance, of violins and pianos, become central to themes of forgotten joys: ‘I haven’t got the heart to dance’ says Anna in one scene, ‘I can’t play music anymore’ says Adrien in another. It is the image of Manet’s oil painting: ‘Le Suicidé’ that recurs throughout.

Perhaps the intensity of this artistry may somewhat distract at times – it is certainly easy to devote more time than necessary to working out the rationale for the bursts and fades of colour. Likewise, the three act structure of the piece occasionally disorientates, with each act offering a feeling of finality that makes the film’s continuing thereafter initially surprising. To its favour, each presents equally a thoroughly engaging story, with arresting mysteries that hook in the chase and devastate in the catch. Ozon teases endless possibilities, including a hints of repressed homosexuality, always leaving enough unanswered to allow interpretation.

Frantz finds success both as an intellectually challenging work and a pleasingly emotional experience. Ozon balances art house aesthetics and populous storytelling with a deft and welcome touch which should make the film easily accessible for all – even if audiences might have to go a little further a field to locate a screening. Do though, it’s a journey worth making.