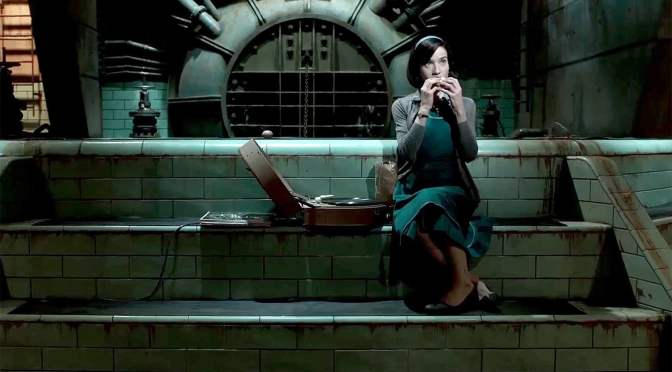 It’s a fairytale romance like no other. Here’s the story behind Guillermo del Toro’s magical new film…

Found as an infant with scars upon her neck and no voice, Elisa Esposito has only two friends in the world, struggling gay neighbour Giles and co-worker/interpreter Zelda. She lives above a Baltimore cinema and works as janitor for a secret government laboratory in the Cold War.

When Colonel Richard Strickland brings in a humanoid amphibian, which has been captured from a South American lake, Elisa begins to visit the creature in secret and quickly forms a close bond.

In The Shape of Water, Elisa must save the amphibian she has fallen in love with from those wishing to exploit him in the cruel warring of the 1960s.

‘Not only was she the first choice, she was the only choice.’ So said Guillermo del Toro of his leading Shape of Water star Sally Hawkins. Having charmed last year in Paddington 2 and dazzled before that in Maudie, Hawkins has yet to bag an Oscar or BAFTA but she’s a hot tip this year.

Whilst the film may belong to its mute lead, handpicked too were Nocturnal Animals‘ Michael Shannon, here playing Strickland, and The Help‘s Octavia Spencer, as Zelda. Though Richard Jenkins’ part of Giles was written with Sir Ian McKellen in mind, the director was more than happy to have him on board.

You won’t recognise him under all the prosthetics, but Doug Jones is once again ‘the creature’ of Del Toro’s imagination, having previously starred in Pan’s Labyrinth and Hellboy. Jones, however, says that this role was nothing on Pan‘s Faun and Pale Man, requiring just three hours in make-up every day.

Each character was given lengthy backstories by Del Toro, with some actors receiving files over forty pages long.

A Guillermo del Toro film through and through, The Shape of Water has been conceived, written, directed and produced by the Mexican maestro. Del Toro devoted nine months to the design of his aquatic creature, along with his extensive team under production designer Paul D. Austerberry.

Vanessa Taylor is no stranger to fairytales, being among the team writing Guy Ritchie’s Aladdin remake, and has co-penned the film, whilst J. Miles Dale is Del Toro’s co-producer.

When you’re applauding the beauty of the film’s look, you have Dan Laustsen to thank and it’s eight-time Oscar nominee Alexandre Desplat (The Grand Budapest Hotel) who’s composed the score.

Befitting a tale of romance, The Shape of Water swims into UK cinemas on Valentine’s Day, February 14.