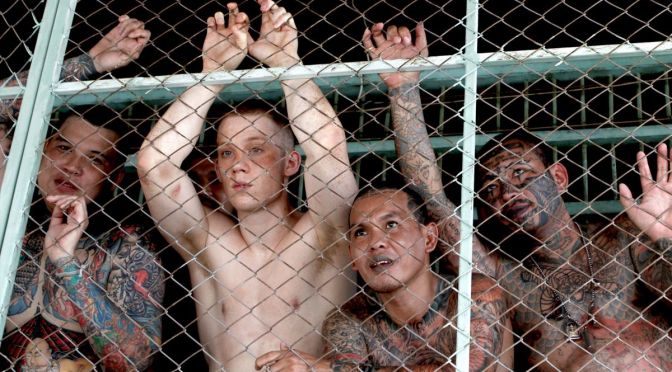 Joe Cole is both pulverised and pulveriser is Jean-Stéphane Sauvaire’s brutal adaptation of 2014 Billy Moore memoir A Prayer Before Dawn. It takes just minutes for the film to scar the eyes and ears by equal measure. Consider that fair warning; this isn’t for the squeamish.

It’s a powerful performance from Cole, as Billy Moore himself, that successfully conveys the baggage of his deeply conflicted protagonist via a script that is wisely unconcerned with a time before. He does so with little by way of dialogue and with a grace that treads impressively in fields of nuance. In the ripples of his muscles and hints of repressed despair in his eyes, there is both fearsome aggression and aggressive fear. A starkly white male, in a dark and tattooed environment, he stands out – initially – as a figure beyond his depth. There is more, however, to this world than ethnic othering.

A career criminal, Liverpool-born Billy had moved to Thailand in 2006. His search for a cleaner life was curtailed, however, by a rapid incarceration within the country’s infamous Klong Prem prison – the so-called ‘Bangkok Hilton’. Even for a man au fait with criminal underworlds, the experience was bruising. As the film depicts, Billy’s first night behind foreign bars unfolded on a dusty floor with up to seventy other inmates and the hanging body of a dead man. A man whom Billy had earlier witnessed be gang raped – here shot in a horrifically sticky manner – as a demonic demonstration of power.

Moore’s book bears the subtitle ‘A Nightmare in Thailand’. Whilst this legend has been excised from the film, its essence is all too present. Director Jean-Stéphane Sauvaire has a history in documentary filmmaking and translates that genre’s vocabulary to the language of drama well. Hand-held camera shots are as prolific as they are disorienting throughout, whilst – as was in his Johnny’s Mad Dog of 2014 – Sauvaire employs non-actors to play Billy’s fellow inmates. Each is a former Thai prisoner.

If it is hard to judge the faithfulness of a depicted scenario that you have never yourself experienced, this world feels extraordinarily real, in part by virtue of the lived experience on screen. Though the film’s fight lies in its brusque choreography, its power belongs to its humanity. Perhaps the strongest scene of the film is that in which inmates explain to Billy what boxing means to them: ‘it makes me feel warm’.

Insights such as this belie a great and unexpected wisdom lurking behind Sauvaire’s tight camera lens. Billy, like many in the prison, suffers the consequences of an addictive personality. If it is neither drugs – here: Ya Ba – nor nicotine, it is the ring itself. When a doctor warns him that boxing could bring an early end to his life, Billy insists that it is his life and proceeds to enter a match wearing his own iteration of Christ’s crown of thorns: one of bamboo. Few films have so profoundly put forward the case for addiction being a mental health condition. Indeed, were the film not a dramatisation of real events, it might be deemed an all encompassing metaphor for a life trapped in trauma.

Cinematically expressing Billy’s harsh experience is the phenomenal soundscape of Nassim El Mounabbih. A wise move sees Sauvaire restrict the subtitling of the largely Thai dialogue, leaving much more to be said by a heightened volume, tuned into the minutiae of prison life. The film opens with a synthetic burr but is more concerned with heavy breathing, grunting, sniffing, shuffling and scratching. Often these sounds are raised in isolation from all other diegetic sound and deafen by virtue of it. The effect is to take the immersive strength of Sauvaire’s action and make them even more compulsively unbearable.

Sauvaire has drawn from reality a thrill to behold for all the wrong reasons. His film is extremely violent and yet oddly poetic. Thrilling, but deeply sensitive. Few films take you so deep within their canvas.

One thought on “A Prayer Before Dawn | Review”