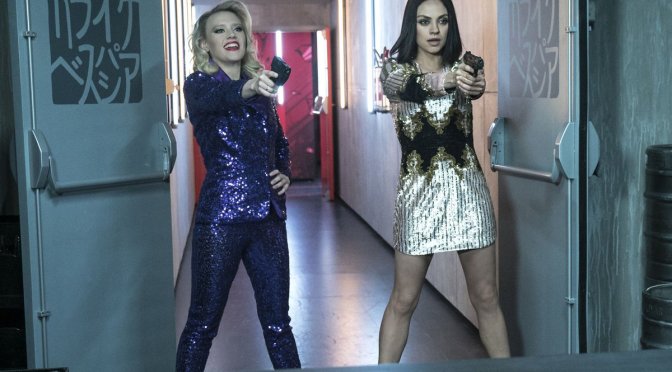 The Spy Who Dumped Me – likely conceived title first – opens like a typical post-Bourne thriller and segues into familiar spoofing territory. Two fish-out-of-water heroines flounder across Europe, from set piece to set piece, screaming and flapping all the way. If the script, by director Susanna Fogel and co-writer David Iserson, leaves something to be desired, you’d be hard pressed to notice thanks to likeable central performances from a well-paired Mila Kunis and Kate McKinnon. A pity, then, that they’re not quite enough.

It being well established that SNL star McKinnon is comic dynamite, there’s joy in witnessing an equally charismatic Kunis raise her own bar to form a pleasing slapstick synchronicity. Playing best friends for life, Audrey (Kunis) and Morgan (McKinnon), the duo quickly gel to form a very believable aura of long-term chemistry. It comes as no surprise, then, that Morgan has Audrey’s back when the man who recently dumped her by text (Justin Theroux) turns out to be a CIA agent in possession of a priority asset and burdens her with the task of delivering it to a cafe in Vienna. If the scenario’s far-fetched, resulting in a globe trot of Europe, their friendship isn’t, which is exactly what this sort of film needs.

Not unlike the actors themselves, Morgan – last name: Freeman – and Audrey are chalk and cheese on paper but get on like a house on fire. The former is a zany unemployed actress, often dismissed as ‘too much’, while the latter is a two-time college dropout, too afraid of failure to take risks. It’s a silly meet straight relationship you’ve seen before but fits well in the film’s format. For all its high octane action and criminally convoluted plot, this is a film concerned with female self-acceptance and personal growth. The metaphor is pretty ludicrously conceived but just about welcome in a summer still dominated by male-centred blockbusters, against which Fogel’s eye for choreography holds up well. A car chase through the heart of Vienna is particularly efficient.

When it comes to balancing her action and comedy, however, Fogel is less assured. Put simply, the film is neither  funny enough to galvanise giggles nor soundly structured so far as to truly thrill. Whilst there’s visual wit in moments like the scene where an assassin is told to take out ‘two dumb American women’ in the heart of Prague but struggles to find the right pair among a sea of identikit dumb American tourists, the script itself is generally dependent on performance elevation over diologic ingenuity. Lines like ‘I have freakishly strong teeth’ and ‘that is the Beyoncé of the government’ aren’t actually funny but McKinnon seriously up-sells them and wins laughs by sheer force of nature.

Winning performances alone, however, do not a triumph make. Even an exuberant McKinnon – on similar ground to Ghostbusters and Rough Night – and sharp Kunis can’t save the film’s middle act from dragging and closing third from devolving into head-scratching confusion. The pitch for this world is trust no-one but so few supporting characters escape multiple plot twists that remembering them is the more challenging feat. Compared to Paul Feig’s similarly pitched but superior Spy, Fogel’s film lacks energy and hasn’t a male foil for its leading ladies as memorable nor parodic as the Stath and Jude Law. Theroux barely registers and Outlander’s Sam Heughan, as MI6 agent Sebastian Henshaw, plays it all just a bit too straight to not present as bland.

Despite the promise of its premise and casting, The Spy Who Dumped Me suffers much the same fate. There is evidence here that Fogel has a smash blockbuster within her potential, or perhaps a small comedy. Both together? Not yet.