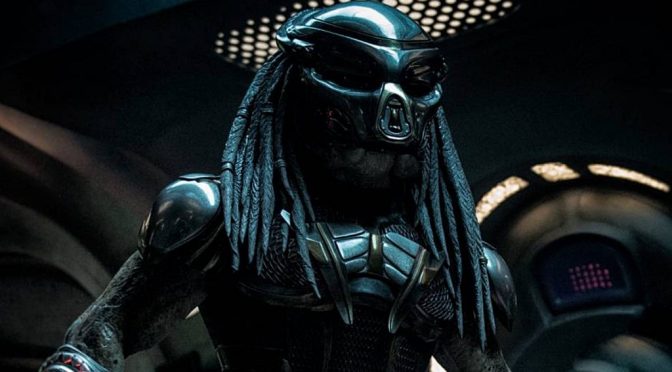 If the Predator franchise must run ad infinitum – three dire sequels failed to kill it – subverting the tone to retro romping territory seems as good a way as any to proceed. That’s Shane Black’s approach in this instance. Black’s Predator is gory pulp but suffers from ropey editing and sadistic intent; even humour can’t save that.

Of course, Black is no newcomer to the franchise, having played the first to meet a grisly end in John McTiernan’s 1987 original. It makes sense, then, that it should be he who takes things back to where they began. Literally, the film opens with a predator crash-landing into the jungle. It’s a muddled opening, lacking empathy, clarity and development, but cuts effectively to the chase. The first disembowellment occurs within just five minutes of the runtime. There’s no room for Rambo-esque build up in Black’s script, co-written with his three-time collaborator Fred Dekker.

Army sniper Quinn McKenna (Boyd Holbrook) and his team are in the middle of a complex hostage retrieval operation when the spaceship-wrecked Predator steals his scene. Amid the confusion and massacre, McKenna stumbles across the ship’s armoury, manages to incapacitate the alien assassin and has the best of its weapons shipped to his home, ex-wife Emily (Yvonne Strahovski) and autistic son Rory (Wonder–boy Jacob Tremblay).

Meanwhile, Sterling K. Brown plays unintentionally boring government agent Will Treager. He’s head honcho of the so-called ‘Stargazer Project’ – a morally dodgy operation, monitoring the frequency of Predators arriving on Earth – and is quick to seize and sedate the latest arrival. That, and bring in Dr. Casey Bracket (a pleasingly spikey Olivia Munn), who ‘basically wrote the book on evolutionary biology’. In the film’s least surprising twist, the Predator escapes and all hell breaks loose…again.

The Predator being no tamed for teens blockbuster, the violence is pretty severe. But that’s not to say that this isn’t essentially teenage material. All but two characters in the film are men – of the women, one is a stay at home mum – and a strain of deeply juvenile humour consistently rears its head throughout. One such ‘hilarious’ joke comes in the moment one character tells another not to use the word ‘retard’ because, as he puts it, Quinn’s ‘son is retarded’. He’s referring here to Rory, whose autism is later termed: ‘the next step in the evolutionary chain’. If it wasn’t clear enough already that the film lacks sensitivity, Black hammers it home by having Quinn go on to murder a man – whilst in front of his son – with a tranquilliser dart to the eye.

Then again, The Predator serves predominantly as an eighties pastiche and those were simpler cinematic times. If the retrogressive politics disappoint, the film’s cultural callbacks are winningly nostalgic. Beyond wry recounts to the first Predator – ‘Get to the choppas!’ – there are checkbox nods for Blade Runner, Ghostbusters, The Goonies and any number of Hughes and Spielberg films.

This sort of thing can only work once though and final-act hints of more to come raise concerns that the reboot has already run out of steam. Black’s is not the sequel to save the franchise but it does, at least, bring back a bit of the old fun.

4 thoughts on “The Predator | Review”