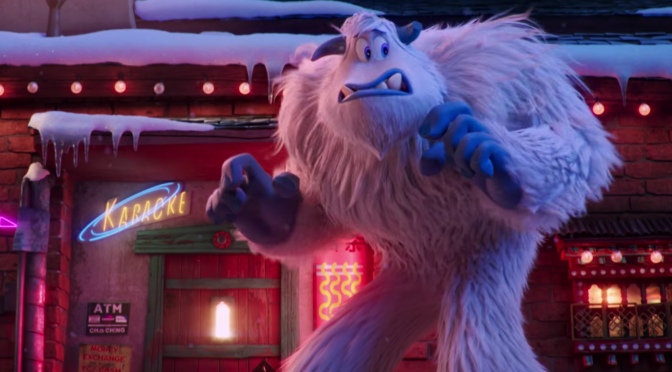 From the studio that brought you an endless stream of Lego movies comes another franchise in the making. If this unremarkable animation is little more than distraction cinema for tots, it should at least leave audiences with a pleasing desire to be that little bit more inquisitive.

Channing Tatum voices Migo, a status quo loving Yeti whose entire world is rocked when he encounters a mythical ‘smallfoot’, whose very existence contradicts the ancient stones that have led his close minded society for generation. The fun twist here, based on a book by Spanish animator Sergio Pablos, is that smallfoots (smallfeet?) are actually mirror skeptic humans. When Migo is banished from his mountain home by the pious Stonekeeper (American rapper Common), he must find proof of what he saw or spend the rest of his days in exile.

Narrationally, there’s crossover with a whole host of family favourites in here. I was reminded of Henry Selick’s Nightmare Before Christmas and, increasingly, the Hotel Transylvania series, whilst Monsters, Inc.’s Abominable Snowman feels a near-ancestor. The animation is bright and breezy, the tone likewise. What’s lacking is a sense of creative ingenuity and visual distinction, with the film all too closely resembling Illumination’s cone faces and colourful grading.

Parallel to Migo’s story, is the arc of Percy Patterson (James Corden), a waned documentary star who dreams of returning to the spotlight and a reversal of his ratings collapse. He too could do with proving the existence of his big footed counterpart but gets more integrity than he bargained for whilst trying to stage a fakery. Making the most of its slapstick potential, the film plays with the inability of either side to understand the other: humans hear roars, yetis get only squeaking. In one fun misunderstanding, Migo attempts to warm up a frozen Percy by heating him over the fire and feeding him, a good will gesture that inadvertently presents like a spit roast.

One or two big names pepper Smallfoot’s ensemble, with Danny DeVito a tad underused as Migo’s gong banging father Dorgle and Greatest Showman star Zendaya bringing cutsie value as his smallfoot-believer love interest Meechee. Patricia Heaton cameos as an irate bear and there’s even a part for NBA legend LeBron James as the only dark purple yeti, perhaps in concession to diversity?

Odd but not half as quirky as the film’s real message: an enlightenment parable about the rejection of scriptural authority in favour of questioning societal norms. It’s surprisingly deep and much more morally ambiguous than your average family animation. A throwaway gag here suggests that real-world human bankers are more evil than the alleged big bad you might first suspect. It’s a shame that the resolution seems quite so unlikely but that’s more of a reflection on humankind.

Every now and then, a musical number pops up – inane lyrics (‘right here, right now, we need to find a way somehow’) in all bar one corker but catchy beats – to help the flakey plot snow drift along in its path to a genial, heartfelt finale.