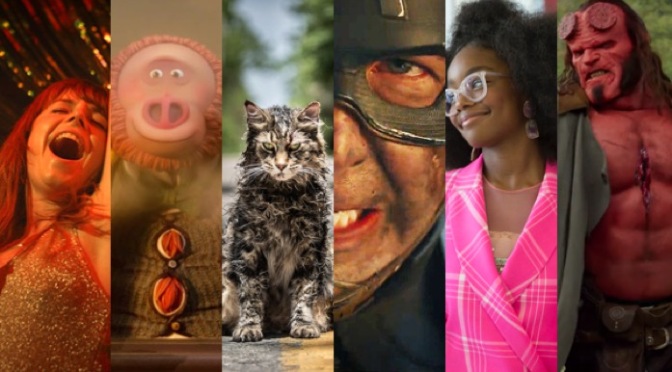 Want to know what’s coming to a cinema near you this April? Look no further…

Stephen King fans continue to be cinematically spoilt with yet another adaptation from the writer’s beloved catalogue. Amid high expectations, the film has come under fire for a spoiler-tasctic trailer and a major plot altercation from the book that we shan’t give away here.

Based on the eponymous novel by Anthony Burgess, Stanley Kubrick’s despotically violent dystopian classic shocked audiences back in 1971 and continues to horrify today. This re-release offers fresh eyes the chance to experience the film on the big screen.

Rohrwacher secured Best Screenplay at Cannes for this Italian crime drama. A Netflix distribution, the film concerns the trials of kindly peasant Lazzaro (Adriano Tardiolo) and his family when they wind up involved in the ‘Great Swindle’ of a tobacco baroness.

Tom Hollander and Jonathan Rhys Meyers co-star in this English language debut from Sthers. In the lead, James Caan plays Harry Rosenmerck, an Ashkenazi Jewish American who abandons a job in cardiology to become a pig farmer in Nazareth.

Startling survival documentary about a deep sea diver who finds himself stranded on the sea bed with just five minutes of oxygen in his tank and no hope for survival.

An all-star cast lend their voices to this latest from Kubo and the Two Strings producers Laika. Hugh Jackman is Sir Lionel Frost, an explorer recruited by Zach Galifianakis’ Mr. Link to find his long-lost relatives in the fabled valley of Shangri-La. With Zoe Saldana and Emma Thompson.

Celebrating fifteen years of Peppa Pig, this Festival of Fun offers youngsters the chance to enjoy ten brand new episodes on the big screen. Peppa and George will splash in the mud, whilst Grandpa Pig celebrates his birthday.

Indian espionage from the studio behind Padmaavat. Based on the story of ex-RAW agent Ravindra Kaushik, a key figure in 1970s India.

DC are riding high, having finally given up on their muddled cinematic universe. Aquaman was a mega-hit at the end of last year and Shazam! is expected to follow suit. Crucially, this is a superhero film that remembers to have fun. With Zachary Levi.

Bert Trautmann made an incredible transition in the 1940s. An Iron Cross winning Nazi, Trautmann’s arrest by the allies saw him wind up in a Lancashire POW camp on the end of the war. Remarkably, within months, he had been scouted as a prestigious footballing talent, leading to a ten year stint at Manchester City, a broken neck and an OBE. This is his story.

When creative youngster June discovers an incredible theme park hidden in the local woods, it’s not long before she discovers that it spawned from her own imagination. With the park falling into disarray, June must team up with resident animals – voiced by the likes of Mila Kunis and John Oliver – to set it back on track.

After 2008’s Hellboy sequel failed to reap a third for Guillermo del Toro and company, a whole new team have come together for Neil Marshall’s reboot. David Harbour replaces Ron Perlman as Hellboy, the demon turned government employee, working from a script by Andrew Cosby. Milly Jovovich co-stars as the ancient sorceress Hellboy must battle to save the world.

A Deal with the Universe (Jason Barker)

Barker’s debut documentary promises a very personal chronicle of parenthood and gender transition. The film is drawn from a decade of video diaries and is remarkable in its intimacy.

Girls Trip’s Regina Hall and Black-ish’s Marsai Martin unite in this reverse-Big comedy about a take-no-prisoners tech mogul who wakes up one day to find herself back in her thirteen-year-old body on the eve of a do-or-die presentation.

The latest film from independent hitmakers A24, Mid90s marks the directorial debut of 21 Jump Street and The Wolf and Wall Street star Jonah Hill. Sunny Suljic (The Killing of a Sacred Deer) leads as Stevie, a young teen who winds up involved in an LA skater group in the mid-1990s.

Carlos Acosta broke boundaries and became the first black Principal dancer of The Royal Ballet. He was the Company’s Principal Guest Artist for seventeen years, and retired from classical ballet in 2016. Bollain’s film dramatises his story.

Madhuri Dixit, Sonakshi Sinha and Alia Bhatt star in this Hindi period drama set during the partition of India. Expect a feature a lot more intense than Viceroy’s House.

Now, you listen ‘ere! He’s not the Messiah, he’s a very naughty boy!

Having given Vince Vaughn a career high in Brawl in Cell Block 99, S. Craig Zahler slows things down for Dragged Across Concrete. Mel Gibson leads as Brett Ridgeman, with Vaughn as his police sidekick in the fictitious city of Bulwark.

Head Full of Honey (Til Schweiger)

Curiously, this US remake comes courtesy of the original German film’s own director. Nick Nolte leads as a widower with Alzheimer’s who embarks on a road trip to Venice by his granddaughter (Sophia Lane Nolte). With Emily Mortimer and Jacqueline Bisset.

Let There Be Light (Kevin Sorbo)

Almost two years after its domestic release in America, Sorbo’s Christian drama finally reaches the UK. This is the story of an atheist who finds religion after a near-death experience. Watch out for a cameo from Dionne Warwick.

In English, ‘loro’ translates as ’them’. In Sorrentino’s film, ‘them’ refers to the group of businessmen and politicians who gravitated around Italy’s premiere tycoon Silvio Berlusconi in the years between 2006 and 2009. Expect bunga bunga.

Once Upon a Time in London (Simon Rumley)

Mere months ahead of Quentin Tarantino’s Once Upon a Time in Hollywood, Simon Rumley gets in there first with an unrelated crime drama from the other side of the Atlantic. This is the story of notorious gangsters Billy Hill and Jack Comer, their legendary rise and violent fall.

Grisly comedy drama about psychopathic puppets who are brought to life during an auction and embark on a particularly bloody killing spree. Not for the faint of heart. Would struggle to be worse than The Happytime Murders.

Inspired by the life of Melita Norwood, Red Joan sees Judi Dench play Joan Stanley, a retired librarian whose life is uprooted when she’s arrested for her past KGB sympathies. In flashbacks, Sophie Cookson plays a young Joan and the truth is unveiled.

A Bangladesh-UK co-production, Shongram tells the story of an English reporter and the old freedom fighter she meets when investigating the 1971 Bangladesh Liberation War. With Anupam Her and Asia Argento.

A 4k restoration brings this questionable family classic back to cinemas for a limited run. You know what they say, Goonies are forever.

With Pixar’s Cars franchise having bitten the dust, here’s a brand new one for young motor maniacs. The most expensive animation to ever come out of Malaysia, Wheely sees a cabbie (Ogie Banks) take on a mobster truck in the hope he can save the love of his life.

Low-budget independent film about a group of adults with special abilities who don fancy dress when they realise that half of world’s population has been turned to dust. Limited release.

Chinese romantic drama from the director of A Touch of Sin and Mountains May Depart. A violent love spans almost two decades. With Tao Zhao and Fan Liao.

Having ditched Can You Ever Forgive Me, Julianne Moore will be hoping for success similar to that met by Melissa McCarthy in this drama about an opera singer who becomes trapped in a hostage situation when she’s invited to perform for a wealthy industrialist in South America.

In the town of Merced, a commune of activist nuns run an illegal cannabis farm. They use it to make medicine for everything from epilepsy to cancer, fighting against the authorities, the sheriff and local cartels. This is the story of Sister Kate, the Weed-Growing Nun. Nothing else matters this month.

Ukraine’s submission to this year’s Foreign Language Film category at the Oscars, Donbass explores the degradation of society in the country’s Russian-occupied East. It is a tale of propaganda and manipulation.

Acclaimed on its release in America last Summer, Eighth Grade finally arrives in the UK on something of a bandwagon. Burnham was inspired by his own battle with anxiety in writing the film’s script, which sees Elsie Fisher play a life-coaching teen vlogger.

Japanese drama – literally titled: ‘phantasmic light’ – Maborosi tells the story of a woman forced into remarriage after the death of her husband. Based on the novel by Teru Miyamoto.

Summertime, 1994. In a quiet mining village just outside Doncaster, a rumour stirs about the legend of a giant carp in the nearby decoy ponds. Tom Varey plays Trevor, the young man who leads his friends into the deep. With Angus Imrie.

German animated buddy movie, based loosely on the Grimms’ Bremen Town Musicians and known domestically as Marnie’s World. A cat, rooster, dog and donkey hit the road for a chaotic adventure. From the makers of Luis and the Aliens.

Susanne Wolff stars as Rike, a strong woman torn from her contented world during a sailing trip. When she becomes the only person to come to the aid of a group of refugees shipwrecked on the high seas, she is shown the limits of her importance and of the empathy of her cultural milieu.

The Dig (Andy and Ryan Tohill)

After serving fifteen years for murder, Ronan Callahan (Moe Dunford) returns home to find Sean (Lorcan Cranitch) , his victim’s father searching for the body. Ronan soon realises that the only way to get rid of him is to help him dig. Irish thriller.

The World is Yours (Romain Gavras)

French crime comedy and Cannes debutant. A small-time dealer dreams of another life but can’t afford it. To escape, he must accept one last job involving Spain, drugs, the Illuminati and his overbearing mother. With Karim Leklou and Isabelle Adjani.

What are you most looking forward to? Let us know in the comments!