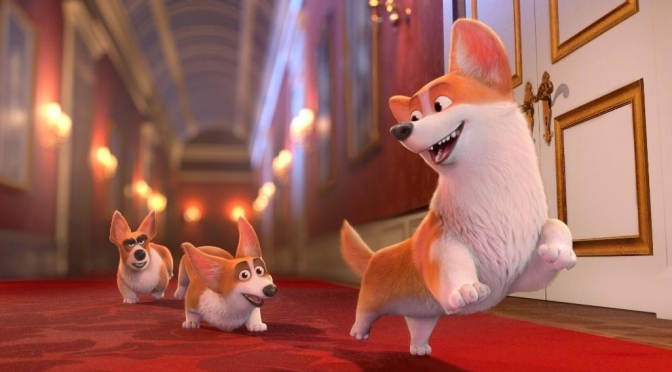 A kind of animated Pudsey the Dog: The Movie, The Queen’s Corgi is pretty banal stuff. It’s a typically innocuous production from Belgian studio nWave – whose Son of Big Foot success was a rare hit. In its defence, The Queen’s Corgi is very well cast and as impressively designed as a film with $20m behind it can be. Beyond visual and vocal panache, however, there’s precious little to write home about here.

What’s strange about the film, which comes from the writers of the superior Gnomeo & Juliet, is that it actually opens rather well. A wordless prologue witnesses Queen Elizabeth II (Julie Walters) gifted a new corgi by Prince Philip (Tom Courtenay) and melt into adoration. Rapidly Rex (Jack Whitehall) becomes the sole focus of royal attention. He’s ennobled ‘top dog’ and proves toxically spoilt, much the chagrin of Buckingham Palace’s staff and the other corgis. Let’s overlook the fact that her Majesty no longer owns any corgis, never mind four.

Time passes and Elizabeth’s prize pup grows to become a doggy equivalent of The Bachelor. Thus, in fly none other than Donald and Melania Trump (impressionists Jon Culshaw and Debra Stephenson on fine form) with a match – to cement ‘the special relationship’ – Mitzi (Sarah Hadland). Horrified, Rex’s attempts to evade his future bride lead to humiliation all round and it’s not long before the top dog hits rock bottom. Tricked by Charlie (Matt Lucas), another of the Queen’s corgis, into seeking a new home in the Vatican City – apparently Pope Francis is seeking companionship – Rex winds up first in the Thames and then in a local shelter.

Banal, right? You were warned. As it goes, Disney’s Oliver and Company comes to mind as the tale progresses and a sweet start flounders. Seemingly desperate to entertain parents as much the core audience, directors Ben Stassen and Vincent Kesteloot provide a litter of mature references – from Rocky to The Hunger Games – but repeatedly fall flat in the process. In one such instance, the film hinges on a grossly inappropriate recall to Fight Club, whilst Rex’s gold digging love interest Wanda (Sheridan Smith) can’t help but feel uncomfortably wily. There’s even room for a moderately homophobic gag about queens.

It’s a pity, in some ways, that The Queen’s Corgi is quite so desperately bad. There’s certainly something hilariously inappropriate these days about a European animation celebrating British symbols of patriotism. Expectations for this brand of kiddie fare are rarely high – nWave also made The House of Magic – but one can always hope. Maybe it’s just about cute and chaotic enough to entertain the very young but grown-ups won’t buy it. No degree of strong casting and animation can quite save this one from the dog house.