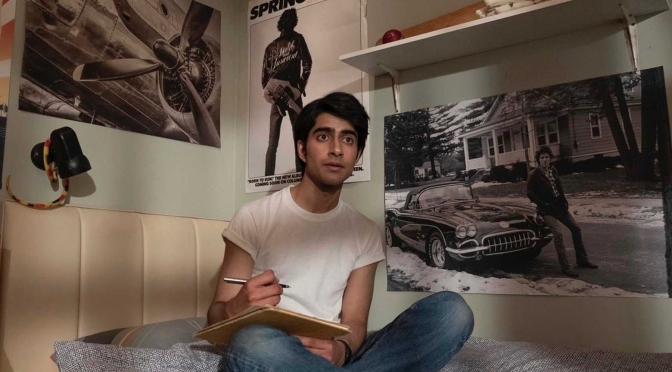 Be wary of opening your heart to this one. A film of two halves, Gurinder Chadha’s Blinded by the Light offers feel good delights and absolute devastation in the same hand. A tribute to the power of meaningful lyricism and subtle reminder of the forces that seek to estrange the freedom to be from those who dare to be different. All is umbrellaed beneath the rousing music of Bruce Springsteen, voice of the disenfranchised and powerhouse of the American songbook. When a boy from Luton hears that he was born to run, he runs. He runs in the face of adversity and runs because it’s all he’s got. The promised land awaits him and maybe one day we’ll all get there.

The film – Chadha’s best since Bend it Like Beckham launched the career of Keira Knightley – draws from the eighties set memoir of Sarfaz Manzoor: Greetings from Bury Park: Race, Religion and Rock N’ Roll. On screen, Sarfaz becomes Javed and is played in earnest by Viveik Kalra, a newcomer with a killer smile and bags of potential. He’s the son of all work, no play traditionalist father Malik (Kulvinder Ghir) and mother Noor (Meera Ganatra), worked to the bone to make ends meet. Knucklehead racists spit upon Javed daily, whilst neighbouring Pakistani families keep plastic sheeting on their doormats in anticipation of the urine that will inevitably be posted by white, would be nationalist kids. It’s a pointed scene that frames one supremacist rally against a Tory banner proclaiming the might of Thatcher’s united Britain.

And yet, there is hope. On starting college – not, as his family believe, to study economics – Javed is introduced to the late ripples of a past peak Bruce Springsteen. While the school jock might dismiss the Boss as some parental has been, Javed is transfixed. In a brilliantly executed sequence, set to a stormy night, Chadha captures the galvanisation of his enlightened soul with tremendous flare. Lyrics pop into life across the frame, projected luminescently upon the chalky white of a council estate. Blinded by the Light is, self-consciously, not a musical but revels in jukebox ingredients. When Springsteen’s ‘Born to Run’ erupts illicitly from the school radio speakers late in the film, it harkens an all-singing, all-dancing routine blazing through the streets of London. The Breakfast Club is an easy reference, alongside Godard’s Bande à part and The Kids From Fame. So long as there is music, anything is possible.

Perhaps these quasi musical inclinations verge too often on over indulgence. Maybe, at two hours, Chadha’s film – co-written by Paul Mayeda Berges and Manzoor himself – outstays its welcome. Certainly, there is room for trimming. Nonetheless, as it is, Blinded by the Light is a consistently entertaining winner and genial provocateur of smiles. It is a cocktail of realist grit and heightened dreamy affluence. The sort of film that screams eighties in its outlandish fashion and soundtrack, more so than ever did the decade itself. In smaller touches too the film charms. The brief glimpse of Javed’s sister Shazia (Nikita Mehta) cutting onions in swimming goggles or his headteacher (Sally Phillips) wielding her enormous mobile telephone. Best of all is a first kiss sequence more endearing than any rom com of recent years.

Painted in deep shades, Chadha’s canvas is a beauty. Her portraits exude humanity, with her depiction of the British Pakistani experience in the eighties peerless. There’s artistic confidence here but an ear for populist compassion to root it home. In Kalra, Chadha has found another gem and in Manzoor’s story a perfect vehicle for her talents. The blending of light and dark is too impressive here for Blinded by the Light to be reduced to the title of crowd pleaser alone. It is a triumph.

3 thoughts on “Blinded by the Light | Review”