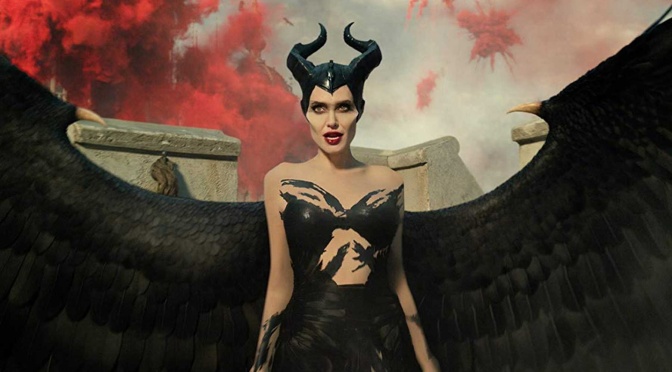 Much like Alice Through the Looking Glass before it, Maleficent: Mistress of Evil has been too long coming to truly still warrant its own existence. The ever welcome screen presence of an on-form Angelina Jolie aside, this is that vogue of follow up that no one asked for and fewer still needed. Indeed, Mistress of Evil has all the drably conceived hallmarks of a sequel that Buena Vista would have shipped straight to video twenty years back. It is, at least, no worse than its predecessor, which was itself a deeply inconsistent beastie.

Indistinguishably taking over directing duties from Robert Stromberg, Joachim Rønning opens five years on from the close of the first. Sharlto Copley’s King Stefan is long since dead – no great performative loss if truth be told – with Aurora (Elle Fanning) now well established as Queen of the Moors. In spite of having saved the day last time around, horned fairy Maleficent (Jolie, given a splendid entrance) remains widely feared across the realm as the titular mistress of evil.

We know, of course, that such is a misnomer but she’s not always so sure herself. One thing that the film gets right, even if the fact causes narrative problems later on, is the way in which the lines of good and bad are not always clean cut. Dull Prince Philip (Harris ‘yawn’ Dickinson, replacing Brendan Thwaites) is, for instance, heir to an amicable king and heinous queen. Humans have capacity for great good and greater bad in this world and our own: ‘they swarm the earth like locusts’.

Said King and Queen are played by newcomers to the tale: Robert Lindsay (quickly sidelined) and Michelle Pfeiffer (frequently side-eyed). Whereas he wants peace, she will only find piece of mind when her – weakly conceived – pixie accomplice (Warwick Davies) has helped her wipe out all fae kind, Maleficent very much included. Also new to the story is a predictably played extension to the dark fairy family tree. Idris Elba and Ed Skrein are the only two of note in this strand, the former promoting peace and the later advocating war. No prizes for guessing where this is headed. It would be fair to say that neither Elba nor Skrein could claim this to be their best work, with each seemingly lost in the lacklustre demands made of them. That said, they’re still more engaging screen presences here than the eternally wet Aurora and Philip.

Not content with being solely predictable, Mistress of Evil makes regular nosedives to absolute tedium. Any and all scenes sans Jolie or Pfeiffer aren’t worth the price of admission, whilst even those with teeter of dreary whenever each star forgets to well and truly camp things up: ‘this is no fairytale!’ There is, to Rønning’s credit, a terrifically venomous dinner table sequence early on in the film – ‘If I didn’t know better, I’d say you were making a threat’ – and a number of beautifully framed shots throughout. The moment Pfeiffer ‘breaks’ the neck of a mannequin to reveal the entrance to her secret cellar is a blackly comic delight, whilst the shot of a newly wounded Maleficent waking in unfamiliar surroundings is pure artistry.

With gross inevitability, all builds to a thickly computerised battle, somewhat plundered by the failure of the film to convince that either side is worth supporting. It’s some mercy that Lesley Manville is at least given the opportunity to shine in an otherwise wasted casting. There’s no denying that Rønning’s film has the best effects that money can buy. A pity, then, that money cannot buy good quality writing. No more required, thank you very much.