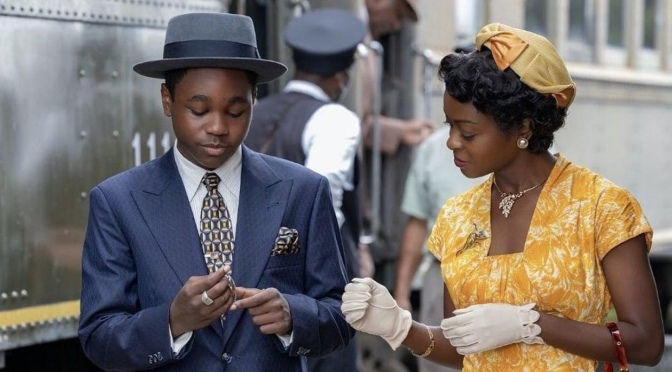 Not seventy years have passed since the brutal lynching of Emmett Till. It was only last year that Joe Biden signed into law the legislation that named the means of his murder a hate crime. Till, from Clemency director Chinonye Chukwu, is, then, a timely dramatisation. A difficult to watch but wholly necessary film and one rendered all the more resonant by the powerhouse central performance of The Harder They Fall’s Danielle Deadwyler. As Mamie Till, mother of Emmett and later activist, Deadwyler proves extraordinarily adept in channelling the emotional reality of grief in its most harrowing form. The less shown, the more revealed.

Few instruments can so well transition from the soothing and melodious to alarming and ominous as the violin. Such contrasts – and, by consequence, transitions – feature prominently in Till. As do violin’s in Abel Korzeniowski often overwhelming – occasionally over played – score. As Chukwu opens, a low angle posits Mamie and her son atop the world. An excess of colour fills the frame while doo-wop rhythm rushes from vehicular speakers. Into such a vision of bliss, foreboding is ladled. Strings scream and a pained expression of anguish breaks through Mamie’s smile. Their drive is through Chicago, a deceptively progressive, would-be safe haven for the pair. Racism may bubble beneath the surface but here, at least, one can challenge it without fear of violent repercussion.

The same cannot be said of contemporary Mississippi. It is 1955, four months before Rosa Parks would refuse to budge and nine years ahead of the legal end of racial segregation in America. The Tills have cousins in Money, Mississippi and it is the build up to Emmett’s visit that fills the film’s opening prelude with such rising dread. Mamie would rather he stayed. ‘I don’t want him seeing himself the way those people are seen down there’ she tells her own mother, a cameoing Whoopi Goldberg, who produces too.

She’s right to worry. The lead up to Emmett’s encounter with Carolyn Bryant (Hayley Bennett) on that fateful day is agonising. ‘Be small,’ Emmett is told but thats just him. He’s bold, he’s a comic, he’s a charmer. How can such a personality be suppressed? Chukwu plays the fallout with innate sensitivity. It is at a distance we are witness to Emmett’s murder. The farmhouse and a singular orange doorway, The devastating sounds and our inability to change the narrative are all the more painful for it.

From here on, Till’s early visual vibrancy drains away. There’s a cautious but astute intelligence in the film’s focus on character over sensation in the unfolding of what follows. It is only after Mamie has seen her son that Chukwu’s camera rises for the reveal. Deadwyler’s delivery is outstanding in these scenes, each of which proves more extraordinarily moving than the last. There is the breakdown as her son’s body finally arrives before her in New Orleans. Then comes the horror, the anger and the transformative moment of resolution. It’s all there in Deadwyler’s performance, with each shift an organic and fundamentally honest progression.

Following so intense an emotional outpouring, the execution of Emmett’s open casket exhibition and the trial of those accused of his murder feel more subdued. Lesser directors might well have built the entire film around either of these sequences. Till knows better. It is a portrait of internal grief and nuance, and one tinged with surprising flights of hope and optimism, despite all evidence to the contrary. There may be no moment of exuberant victory but in its sensitivity, Till makes its impact with a far more meaningful resonance. Deadwyler warrants, in this achievement, all the plaudits that can be bestowed.