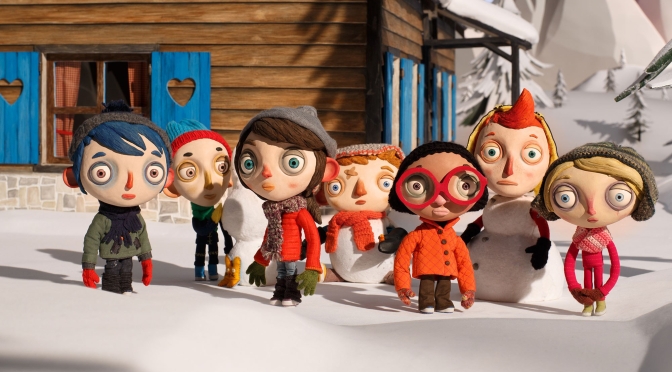 Of the five films to gain nomination in the category of Best Animated Feature in February’s Academy Awards, one only just gaining its UK release this week is Swiss-director Claude Barras’ My Life as a Courgette. An utterly delightful stop motion animation, with an older audience in mind, this is a micro-feature of mesmeric perfection. I left charmed, heartbroken and thoroughly alive.

The film opens with Icare, a young French boy in the solitude of the attic of his home whilst downstairs his mother wastes away through the consumption of beer. Her vocal abuse finds direction at her television and son alike. Icare prefers to be known by his nickname: Courgette, and has sought to recreate his long-absent father through drawing an imagined likeness from torn photos upon a kite, which floats above in the wind like the protective guardian he never was in reality. Having all but given up on his mother’s attention he attempts too, metaphorically, to create her presence via a tower constructed from her discarded beer cans. It’s a devastatingly poignant image that sees Courgette accidentally topple the structure in laying the final can, one foreboding a tragedy that will see the child transferred to an orphanage filled with similarly life beaten youths.

Perhaps inevitable of the care and dedication required to realise it, the technique stop motion has been utilised to create many a masterpiece from Aardman and Laika and its a successful tradition wholly continued here. The delicacy of these puppet children, pulled about like dolls, is so well captured by the medium that it is hard to imagine any other way of adapting the Gilles Paris’ book that inspired the film (although a live action film did so in 2007). The children’s harrowing histories are dazzlingly evident in their eyes: glacial balls, deep-set and hued with dark shades within large sockets, whilst there is a naïvety in their pastel colouring that betrays their young ages, as might otherwise be forgotten amid a conversationalist and mature script.

These are children who have seen much in too few years; an excess of experience that is handled in the film with both humour and tragedy alike. In one scene a boy describes his understanding of procreation to be a hug between a woman and man, the latter of whom’s ‘willy’ promptly explodes. Another sees Courgette describe a repetitive nightmare of his that sees him turn out just like his alcoholic mother. There’s a girl too who runs to the door calling ‘maman’ with every car the pulls up outside but flees in fear when her mother does appear. These are characters handled with painstaking nuance, subtlety damaged but still able to play in the snow during a day trip.

During his time at the orphanage, Courgette develops a bond with the policeman who handled his transfer in the wake of his mother’s death, whilst the arrival of a girl, Camille, opens new horizons in his emotional progression. These developments are traditional, but unveiled in satisfying and pleasurable fashion that builds to a resolution in little over an hour of screen time which is both impeccably paced and far from short-changing.

As for the modelling itself, there’s definitely something of Henry Selick here, in the elongated limbs, oversized heads and darkly maturer themes, whilst the film reminds tonally of Tim Burton’s Frankenweenie by way perhaps of The Magic Roundabout. Coming from the co-pen of Girlhood writer/director Céline Sciamma, My Life as a Courgette is similarly very much a descendent of French cinematic predecessors such as François Truffaut’s The 400 Blows, although in this film the institution is more sanctuary than prison and the end more thankfully resolute than ambiguous.

A delight from start to finish, if the film does anything more than charm and drain, it proves definitively that there’s still life in stop motion animation yet.

One thought on “My Life as a Courgette | Review”