Cynical as it is to suggest that the frequency with which Disney are announcing new Star Wars spin-offs is the most commercially driven move from the House of Mouse since it was announced that basically every animated film they have ever made would get a live-action adaptation, it would be fair to say that Lucasfilm are milking their multi-billion dollar saga for all it’s worth.

It’s all a little bit much.

With a Han Solo film due next May and an Obi Wan story said to be in the early stages of production, it’s time to make an intervention. There are – whisper it – a number of characters in the Star Wars universe that do not need/deserve their own films.

Let’s get this one out of the way first.

Often said to be the most hated of George Lucas’ characters – and certainly at the heart of criticism levelled at the prequel trilogy – Jar Jar’s antics have been granted more than enough screen time already.

Jar Jar was – according to Lucas himself – inspired by Disney-toon Goofy so fits all too well into the Lucasfilm owners’ back catalogue. Intended as comic relief, Jar Jar was anything but right from his first, intensely CGI, appearance in The Phantom Menace.

Just pause for a moment and try to comprehend how annoying a Jar Jar spin-off could be. If you’re struggling, re-watch A Goofy Movie and die slowly inside.

Thankfully, this one seems unlikely. When The Force Awakens was launched, Lucasfilm President Kathleen Kennedy was quite explicit that there would be no return for the Gungan.

The temptation to make ‘The Ewok Movie’ is strong with this one. Don’t.

It would be so easy for Disney to go down the Ewok line in a bid to grab audiences whilst they’re young. They’re cute and extremely marketable. They’re also tedious, a creative misstep, and a deeply dubious depiction of a ‘primitive’ species as being infantile and helpless.

The Ewoks have already been granted two television spin-offs (Remember them? Nope.) which is more than they deserve.

Thankfully, for now, Kennedy’s ruled this one out too.

(Incidentally, if Disney want to extend Star Wars to an older audience, ‘The Best Exotic Dagobah Hotel’ has potential…)

A Boba Fett spin-off as been in the air for a while now and does seem inevitable, despite original director Josh Trank finding himself fired.

This spin-off is not inherently a problem. Fett’s a great character with a bounty of potential…in the original films (ahem).

The issues arise in 2002’s Attack of the Clones when audiences were introduced to Boba’s origin, as a clone child adopted by Jango Fett. Unlike Jeremy Bulloch’s cool and silently menacing fully grown, rogue bounty hunter depiction, the pre-adolescent Boba was just a bit annoying.

When not whining and glaring, Daniel Logan’s baby-Boba was to be found cheering on his Dad’s attack on Obi Wan. When we last saw him, it was his witnessing his father’s decapitation, courtesy of Mace Windu.

Can you imagine how angsty a teenage Fett given his own film would be? Think Harry Potter in Order of the Phoenix. Avoid.

Besides, the actor’s all grown up now…

In Attack of the Clones, Lucas introduced us to the origin story of the Clone army of the original trilogy. Such a film plot for the Separatist Droid Army would, quite possibly, be a contender for the new death of narrative cinema itself.

Not content with being utterly useless as a military force, when given the all important task of having to speak, their inane chatter was risible.

Just imagine the muppet that invented the damn things. 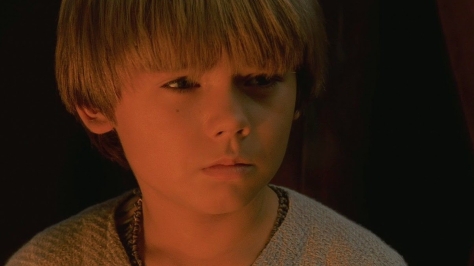