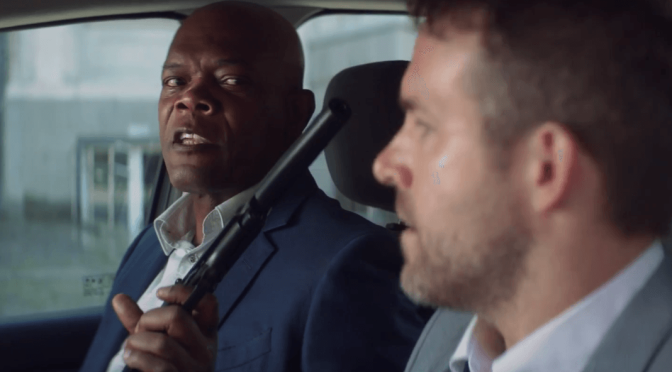 Here is a film that considers the word ‘motherf****r’ to be the most hilarious one liner in cinema since Leslie Nielsen dead-panned ‘Don’t call me Shirley’.

Violence is beautiful, the film tells us; honourable even. Certainly, motherf*****g funny.

If you can roll with such beliefs then maybe The Hitman’s Bodyguard is for you. Maybe. If not, then the film, from The Expendables 3 director Patrick Hughes, is likely to make for rather inconsistent and uncomfortable viewing. Somewhat languid, far from funny enough, and coming nowhere near to justifying its obscene body count, The Hitman’s Bodyguard is ultimately well…expendable.

Ryan Reynolds plays ‘triple-A’ executive bodyguard Michael Bryce, a man at the top of his game with a morally dubious clientele. When a major Japanese arms dealer he’s hired to protect, however, succumbs to a last minute bullet in the head, Michael’s career plummets. Two years later, Michael’s swapped his Jaguar for a battered Ford and his big-shot clients for guarding menial drug-addicted executives (here, Richard E. Grant’s Seifert).

Samuel L. Jackson is Darius Kincaid, the world’s most renowned hitman. Kincaid is the last hope for prosecutors attempting to convict Vladislav Dukhovich (Gary motherf*****g Oldman) – the fascist dictator of Belarus – of crimes against humanity at the International Court of Justice. He has the vital physical evidence that can finally put the deadly Dukhoich behind bars. When Interpol incarcerate Kincaid’s wife, Sonia (Salma Hayek), he agrees to testify in return for her exoneration. Unfortunately, he’s in Manchester and the trial is in The Hague.

The twenty-first century not yet having reached this eighties-inspired buddy-cop-comedy, instead of video-linking Kincaid to the trial, Interpol must physically transport their witness to Holland. It is only when it becomes clear that there’s a traitor amid the force that agent Amelia Roussel (Élodie Yung) turns to her down-on-his-luck ex, Bryce, to personally carry out the escort. He’s not all that keen on the idea for two reasons – namely, he’s convinced that Amelia betrayed him, whilst Kincaid has tried to kill him 28 times in his career.

Action buddy-comedies of this ilk mostly died out some time ago, predominantly due to their being so outstandingly over-milked that their formula grew tiresomely familiar. The Hitman’s Bodyguard, then, is attempting something of a Hot Fuzz-ian nostalgic revival. Where it falls down, aside from the almost nihilistic approach to the mass elimination of humans, is that all the film really succeeds to do is remind you of why the formula got boring to begin with.

Reynolds plays the straight-man (with serious life issues) and Jackson is the loose canon of a foil (a la Midnight Run); both are on autopilot. It’s like the pair have been hired to just ‘do their thing’.

This is, admittedly, an approach to filmmaking that does occasionally work. There’s undeniable fun, for instance, to be had in the cheap sight gag of the characters’ musical road trip with a bus load of nuns. Indeed, both actors do possess a real natural knack for comedy timing.

On the other hand, without firm handed direction from Hughes, this knack feels rather wasted and wholly underpowered. Bickering and swearing does not banter make. It grates.

When discovered on the 2011 Hollywood Black List, Tom O’Connor’s script wasn’t actually comedy, six years later and it’s still not convincingly so. Changes were made just eight weeks ahead of shooting on the basis that the film wouldn’t work as a serious drama. With the comedy not delivering, however, the fallings of The Hitman’s Bodyguard’s action become as transparently obvious as the thematic directions that the film with inevitably make in its drive to an eventual wrap.

Treating Europe like a small village on the peripheries of Kettering, characters hop from location to location with absurd ease and in random timeframes. Coventry – of all places?! – might as well be Syria in its presentation and handling. None of it makes any sense. Why bother follow Bryce and Kincaid to a pub to randomly assault the barman when you’re tracking their motherf*****g phone?!

2 thoughts on “The Hitman’s Bodyguard | Review”