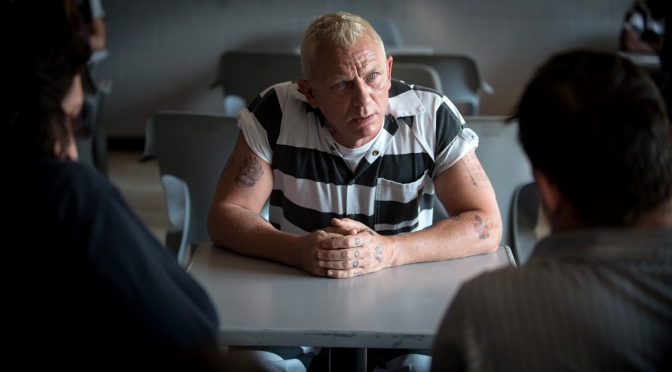 For filmmakers, an attempt at retiring must echo the plot of His Girl Friday. Try as they might, directors simply can’t escape the attraction of getting behind the camera. First returned Hayao Miyazaki and now Steven Soderbergh is back with Logan Lucky, a fun but bizarrely ill-conceived heist caper from (questionably-real) first-time writer Rebecca Blunt.

The Logan family are haunted by a ‘curse’ of some serious bad luck. There’s Jimmy (Channing Tatum) whose promising football career came to a sticky end with an irreparable leg injury, Clyde (Adam Driver), a veteran of Iraq, with an amputated arm to show for it, and Mellie (Riley Keough), the flakey sister with a rough attitude to freewheel driving. Jimmy’s wife has left him for a prat (he takes the kids to see inappropriate films: ‘keeps ‘em quiet..sitting there scared s**tless), won his daughter’s custody, and is intent on moving her to Lynchburg. Then, he looses his job. Were that not bad enough it’s Parks and Recreation’s hapless Jerry Gergich (Jim O’Heir) that sacks him – his leg presenting ‘a liability issue’.

The Logans have a close, if peculiar, familial relationship; and so, when Jimmy cooks up a plan to rob the local race track’s pneumatic, underground tube system of money storage, its not long before he has the pair recruited: ‘My life of crime is over,’ deadpans Driver drily, ‘but you did make my breakfast this morning.’ Also signed up for the – very Soderbergh – heist plot are the Bang brothers: Sam (Brian Gleeson), Fish (Jack Quaid – whose West Virginia twang is pretty dire, bless him) and their incarcerated, explosives-expert, brother Joe (Daniel Craig).

Stage one in the plan is to break Joe from prison – entirely unnoticed – ahead of stage two, to commit the theft itself. Of course, there’s randomness and oddballs aplenty along the way, with the true plot held just out of reach until the, genre-standard, explanatory conclusion.

Logan Lucky has such a promising jumble of ideas and characters that, on reflection, the result is something of a frustration. Driver is exceptional, proving himself again to be one of the most versatile actors in Hollywood to date. Likewise, Craig’s buzzcut and gleeful drawl provide a revelatory turn from the current 007. Rounding off a terrific ensemble, Gleeson and Quaid make for pleasingly dim compatriots, with Keough providing laughs to make you wish she had more to do.

More out of place are irrelevant, yet over-present, turns from Seth MacFarlane, Sebastian Stan and Hilary Swank. Indeed, it is the false steps of these characters that underline what makes Logan Lucky quite so unsatisfying, in comparison to what could have been.

Large swathes of the film are devoted to random and over-stretched sequences. A Game of Thrones gag is funny but goes on too long, the introduction of Stan’s ‘clean-living’ racing car driver is as pointless as it is boring, whilst an extended national anthem scene drags awfully. Cameos are awkwardly squeezed in here, there and everywhere into a script that feels more like a first draft than finished article.

Come the end, so little fails to add up that every step you make out of the auditorium afterwards comes with the new realisation of an element that simply made no sense whatsoever. Shot over 35 days, the production feels rushed. It’s hard even to fathom quite why Jimmy decides to rob the Speedway in the first place.

There is fun to be had here. Blunt’s script (or perhaps it’s Soderbergh’s?) is full of zingers and every relevant character is a well-performed hit. Driver’s pronunciation of ‘co-ley-fl-OW-er’ is a particularly well-deployed highlight. West Virginia gets a gentle ribbing throughout and yet Logan Lucky is, oddly, something of a touching tribute to the state: ‘We West Virginians are proud folk’.

John Denver, too, makes an appearance in the soundtrack, as has apparently become obligatory in 2017, following Free Fire, Okja, Alien: Covenant, Diary of a Wimpy Kid etc…