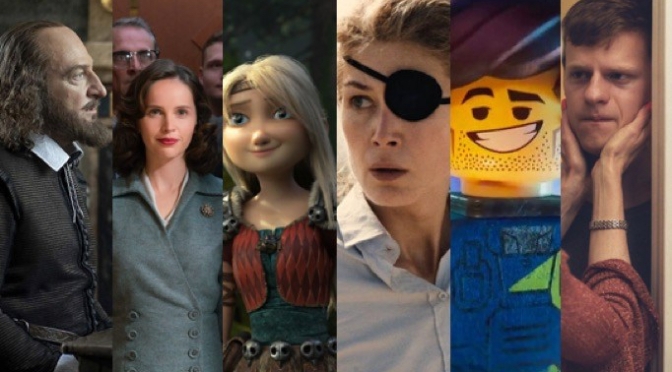 Want to know what’s coming to a cinema near you this January? Look no further…

Based on the story story ‘Barn Burning’ by Haruki Murakami, is the South Korean psychological mystery Sight & Sound called the third best film of 2018. It is about young people in the modern world and stars Okja’s Steven Yeun as a man with a secret hobby.

Can You Ever Forgive Me? (Marielle Heller)

Melissa McCarthy takes on a more dramatic role in Heller’s Oscar nominated biopic. Find out everything you need to know here.

Crucible of the Vampire (Ian Ross-McNamee)

Slow burning horror bolstered by a small role by Neil Morrissey. When junior museum curator Isabelle (Katie Goldfinch) is sent to test the validity of a century-old cauldron at an old country house, she soon learns that all is not well.

Physical adventure games, escape rooms have boomed in recent years and so it is little surprise to find the format adapted to film. Of course it’s a horror. From the director of Insidious: The Last Key.

A big winner at the Golden Globes, Green Book will be hoping to translate this success to its five Oscar nominations. A feel good road movie, Farrelly’s film sees Viggo Mortensen play Tony Lip, who was employed in 1962 to drive  Don Shelley (Mahershala Ali) on a tour through the Deep South during Jim Crow era suppression.

How to Train Your Dragon: The Hidden World (Dean DeBlois)

DreamWorks’ acclaimed trilogy, based on the books by Cressida Cowell, comes to its epic climax. Jay Baruchel returns to voice the much matured Hiccup as he, along with his dragon companion Toothless, quest to discover the a Hidden World. Franchise fans ought to bring tissues, the final act is emotional.

Widely billed as the latest blockbuster from producer James Cameron, this is the latest Hollywood offering to translate manga to western cinema. Bird Box and Maze Runner star Rosa Salazar leads as Alita, a disembodied “core” who awakens with no memory in a post-apocalyptic world destroyed by a technological fall. Christoph Waltz plays the doctor who gives her a new body.

All is True (Kenneth Branagh)

A dream cast unite for this Shakespeare retirement piece. Branagh himself plays the Bard, with Judi Dench on side as his wife Anne Hathaway and Ian McKellen as the Earl of Southampton. After the Globe burns down in 1613, Shakespeare packs his bags and heads home.

Documentary following three Mexican brothers who come together to care for their ailing ninety-three year old grandmother: América. It is a story of family; of loyalty but also of despair.

Joel Egerton’s directorial debut was tricksy psychological horror The Gift and so it’s a sharp left term that sees him follow this with the story of a young man whose baptist parents send him to a gay conversion camp. Egerton features as camp therapist Victor Sykes, whilst Lucas Hedges leads as Jared Eamons, who is based on real-world writer Garrard Conley.

An adaptation of James Baldwin’s novel of the same name, If Beale Street Could Talk is the story of a young African-American woman who quests to clear the name of her wrongly charged partner whilst pregnant with their child. It is the latest film from Moonlight’s Barry Jenkins and boasts a multi-award-winning turn by Regina King.

Zhang Chi is a motor racing champion at the top of his game. When disaster strikes, Zhang is given a five-year suspension, he turns his talents to nurturing the young generation. But can he ever return to the track himself?

A surprise hit in 2014, The Lego Movie launched a franchise that, less surprisingly, has grown tired through over exposure since. Hoping to revive the charm, the Phil Lord and Christopher Miller written sequel finds Bricksburg reduced to a post-apocalyptic wasteland after invasion by Duplo warriors. In a near twist, live action DC stars Gal Gadot, Jason Momoa and Margot Robbie lend their voices to Lego Wonder Woman, Aquaman and Harley Quinn.

Ranveer Singh and Alia Bhatt lead his Hindi musical drama about a Bombay rapper from the ghetto who dreams of success. The journey is bumpy but the end goal transcendent.

Seizing the opportunity to nurture a new horror franchise, Blumhouse follow up 2017’s hugely successful Happy Death Day with a smartly named sequel, again starring Jessica Rothe as Theresa Gelman. When ‘Tree’ finds herself trapped once more in a time-loop, her determination to escape is intensified by the realisation that her friends are now involved. And just in time for Valentine’s Day too.

An instant hit? Quite possibly. Mark Wahlberg and Rose Byrne star as married couple Pete and Ellie Wagner who seek to fill a widening void in their relationship with foster children. Likeable comedy drama from the man behind Daddy’s Home and Horrible Bosses 2.

Rosamund Pike delivers career-best work as Marie Colvin, the former Sunday Times journalist and foreign correspondent who threw herself into danger in the face of self-destruction. It was this attitude that lost her an eye whilst covering Tamil militarisation in Sri Lanka. Charlize Theron produces.

Not so long ago, Rebel Wilson sparked a wave of controversy by suggesting that she was about to lead Hollywood’s first plus-sized romcom. This is that film. Wilson plays an Australian architect in New York who wakes up from a mugging to the discovery that she lives in a ‘PG-13 Universe’. Can she escape clichés and find true love in the process?

Liv Hill stars as a teenage carer who discovers an unlikely talent for stand-up comedy in this feature debut for former professional skateboarder James Gardner. Having premiered at Tribeca last year, Jellyfish went on to when the Michael Powell Award at the Edinburgh Film Festival. One to seek out.

This sixth feature from the director of Blue is the Warmest Colour follows the romantic ebbs and flows of a young screenwriter. When Amin returns home from Paris to his Southern France fishing village he finds love in the way of his career. Mektoub is the Arabic word for destiny but what is Amin’s?

Christopher Abbot and Mia Wasikowska head up this thriller horror based on the novel by Ryu Murakami. It is the story of a seemingly innocent man who sets out from home one day with murder on his mind. Unnerving and darkly comic.

The Kid Who Would Be King (Joe Wright)

A feel good adventure for all the family, this King Arthur update has a lot going for it. Read everything you need to know here.

A re-release for Sturges’ 1941 Barbara Stanwyck and Henry Fonda starring screwball comedy about an odd couple on an ocean liner.

Lebanon’s entry for this year’s Academy Awards and the recipient of a fifteen minute standing ovation at Cannes. Newcomer Zain Al Rafeea plays a 12-year-old Syrian refugee who embarks on a remarkable journey of self-discovery. The film was inspired by Labaki’s concern that children are paying a high price for adult conflicts.

Liam Neeson’s latest action romp is a loose remake of Norwegian film In Order of Disappearance. Neeson plays Nelson ‘Nels’ Coxman, a snowplower who seeks revenge against a Rocky Mountains gang after they murder his son. Think Taken but with snow.

Translated to English, the title of this Polish crime drama becomes Women of Mafia 2. The first film – released only last year – told the story of a police officer infiltrating the mafia. Expect more of the same in the sequel.

On the Basis of Sex (Mimi Leader)

If you loved Betsy West and Julie Cohen documentary RBG as much as we did, then this dramatisation of the Ruth Bader Ginsburg story is a must watch. Felicity Jones stars as Ginsburg, with the film focusing on her role in the 1970 court case of Charles Moritz.

Bill Nightly stars in this London Film Festival film about a tailor whose devotes his life to the search for his missing son Michael, who stormed out years prior over a game of Scrabble. Comedy drama from the pen of Frank Cottrell-Boyce.

Teddy Pendergrass – If You Don’t Know Me (Olivia Lichtenstein)

A near-fatal car crash in 1982 almost ended the career of American R&B talent Teddy Pendergrass. He was only 31. Olivia Lichtenstein’s documentary tells his story.

This is third and supposedly final instalment of the Dhamaal film trilogy. Arshad Warsi, Sanjay Dutt and Ritesh Deshmukh all return for a musical adventure showcase that promises to be three times as entertaining as its predecessors.

Felicity Jones stars as Ruth Bader Ginsburg in Mimi Leder’s ON THE BASIS OF SEX, a Focus Features release.

What are you most looking forward to? Let us know in the comments!