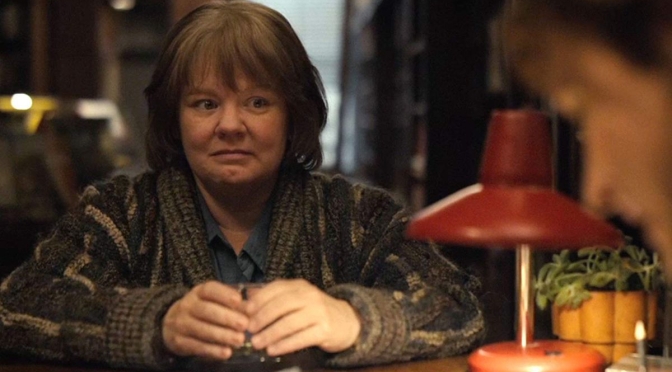 A revelatory performance by Melissa McCarthy is the foremost attraction of Can You Ever Forgive Me, the sophomore film from The Diary of a Teenage Girl director Marielle Heller. Based on true events, this is a relatively low stakes take on criminal activity, albeit one with a winning streak of black comedy down the spine. McCarthy shines at every turn in an increasingly rare reminder that she’s a talent to be reckoned with.

Lee Israel might never have made her name had she not turned to forgery as a final resort in desperate times. A smartly constructed opening witnesses McCarthy, playing Israel, being fired from her job, threatened with eviction from her New York home and turned away from the local vets, having failed to keep up with her beloved cat’s medical bills. Said cat is Israel’s sole companion in the world – her most recent relationship failed because her partner wanted more commitment – and it’s not so hard to see why. Barbed from head to toe, Israel rails against the world and alienates even those she has known for years. Her agent has stopped answering her calls – ‘The world isn’t waiting for a Fanny Bryce biography!’ – and her family are essentially estranged. She drinks too much, works too little and has so long neglected her flat that it is subject to insect infestation and a fowl odour. There are books, books everywhere but she’s not a word to write.

It is in this mire of lethargy that inspiration strikes. Having been forced to sell her most prized possession – a handwritten letter to her from Katherine Hepburn – to make ends meet, Israel is drawn into the lucrative world of collectibles. Whilst a Hepburn letter is worth $175, one from Noel Coward might take up to $400 if it can offer some vestige of juicy personality through the pen. Glee burns in the eyes of the collectors Israel meets and you can almost sense the whirring of her mind as they pay up – each time in cash. The more intimate the better, she learns, and the more expensive by default. Unable to summon such items from thin air, Israel turns to her next best option: fakery.

Screenwriters Nicole Holofcener and Jeff Whitty could rightfully be accused of over-sympathising with their story’s antihero. There is no doubt that Israel had a flair for writing – the memoir upon which this film is based makes for a terrific read – but great pain seems to have been taken here to present her as a woman with no other options. This is opposed to capturing the arrogance of a fraudster whose self-regard saw her sniff at the idea of ‘menial’ employment and openly express pride at the four hundred plus fakes she produced and sold for thousands of dollars to innocent bystanders. In court, she declares that she has no regret for her crime: a scene seemingly content to present the speech as noble. It is a testament to McCarthy’s abilities that Israel presents, despite this, as genuine and complex.

Such critiques aside, Can You Ever Forgive Me remains a thoroughly entertaining watch. Ignoring the on the nose soundtrack choices, Nick Heller’s Mission Impossible meets dusty jazz bar score makes for a neat match to the film’s pacing, whilst Brandon Trost’s beige cinematography recalls a seventies finish – that decade of Israel’s peak – and the dulcet mood she had reached by the nineties. Alongside McCarthy, Richard E. Grant is a delight in the role of self-proclaimed ‘renegade’ Jack Hock, who we meet with the anecdote that he once ruined a raft of priceless furs at a party by mistaking a cloakroom for the toilet. Grant bounces off McCarthy with a childlike glee and dandy sensibility. Put together, they’re a dynamite duo, with each more than capable of matching humour with pathos and devastation. A late act tragedy is more heartbreaking than you might expect and that’s down to the acting.

It is to be hoped, then, that this marks a turning point in McCarthy’s career. Accepting a degree of personal snobbery, this could be the moment in which she leaves behind crass comedy and pursues meatier avenues. As has been clear since Bridesmaids, McCarthy is a powerhouse performer with much more to offer than the likes of The Happytime Murders could ever satiate. Heller does well to provide.

6 thoughts on “Can You Ever Forgive Me | Review”