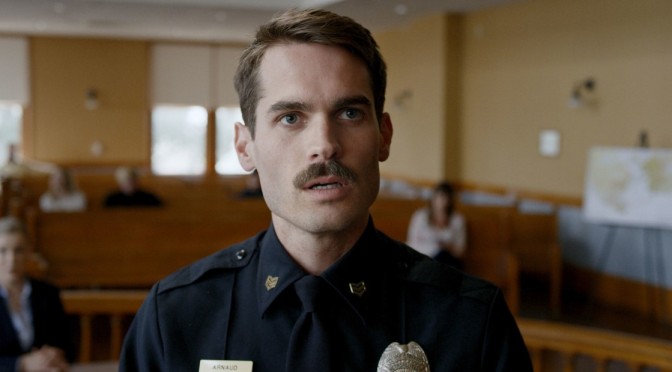 Thunder Road is one for the more patient among us. It is an uncomfortable feature-length account of grief, rage, sorrow, and just about every other adverse emotion conceivable. Based on an award-winning short of the same name, this comedy-drama follows well-intentioned but volatile police officer Jim Arnaud (Jim Cummings) as he struggles to cope in the wake of his beloved mother’s passing. Hostile relations with estranged wife Rosalind (Jocelyn DeBoer) don’t help matters for this moustachioed, ticking timebomb, especially as she’s divorcing him and claiming full custody of his resentful daughter Crystal (Kendal Farr).

Cummings, who also wrote and directed this fraught unravelling of a troubled wretch, delivers an anti-hero precariously bestriding the paper-thin frontier between affable and obnoxious. At points, viewers find themselves naturally gravitating towards sympathy for this poor soul, before being wellied in the direction of contempt. This sustained conflict can be punishing, ultimately contributing to an almost unbearably outré character study. That said, Cummings’ salient insertion of black comedy at key points helps cut through the vicissitude, making things somewhat more tolerable.

It’s impossible not to admire Jim’s efforts as he stumbles through life following his mum’s death, but he’s such a useless chump they always fall short of fruitful. His own worst enemy, things continue to head south in every way after the funeral, and as viewers cringe at Jim’s every woe and meltdown, the unfortunate folks around him fail to offer meaningful consolation. And that’s pretty much the entire film; an unflinchingly honest portrait of a tragic, dejected being.

The first 12 minutes of Thunder Road remain faithful to its source material. During the opening scene, Jim wants to perform a dance routine in his professional garb to ‘Thunder Road’ by Bruce Springsteen, one of his mum’s favourite singers. When the pink, sticker-covered children’s boombox he intends to use malfunctions, he spits out his nerves onto the church carpet and horses on regardless for an excruciating 30 seconds. The rest of the film strives to build upon this painfully awkward, chaotic eulogy scene. It’s a strange choice to kick off with a reimagining of the short, itself a neat package. The feature tries to carry the baton for its predecessor, but it’s no real match. The original was just that: original. This full-length feature may feel just as distinctive, and possibly even more ambitious, but it’s much too derivative for its own good, borrowing banal story beats from other titles.

Alternating between excessively lengthy wide shots and close-ups of his protagonist nothing short of too close for comfort, Cummings never strays far from Thunder Road Junior. The issue is there’s little cohesion in his scant plot, the finished product feeling more like a series of shorts tacked together rather than a uniform narrative with any true sense of momentum. The only thing keeping the audience from throwing in the towel is the experience of pity for the central character. This is a testament to Cummings as an actor who acquits himself extraordinarily well with a jarring, engrossing, and wildly nuanced performance.

Once Thunder Road has sprauchled to its conclusion, a spot of devastation is softened by a small glimmer of hope for America’s most forlorn cop, alluded to by no more than some sentimental music and a teary smile. Praise be the close of this bleak, heart-breaking, and penetrating dramedy isn’t as gloomy as its protagonist’s existence. If ever you’re in desperate need of a reality check, watch this film. Jim is one unfortunate sod whose life makes any other look like a champagne picnic.