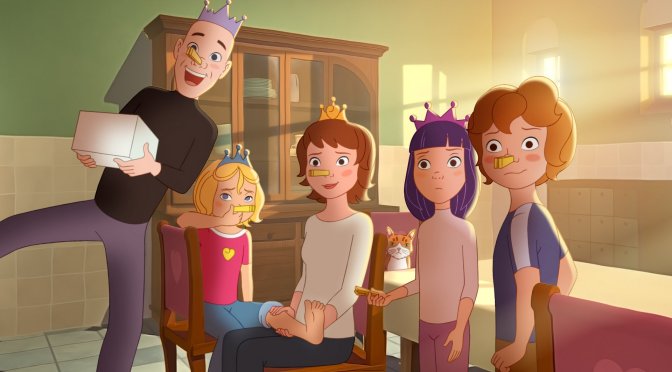 With its genially old fashioned ideologies and almost – not quite – Ghibli like aesthetic and score, Princess Emmy is never less than charming, never more than fine. The film comes from the producers of Maya the Bee, is sweet on the eye and sticks around only so long as it’s welcome – a breezy seventy odd minutes. Whilst it is aimed squarely at that bygone image of the little girl who dreams of ponies and princesses, there’s enough backbone here to maintain a notional sense for moral modernity.

Emmy – pleasingly voiced by BFG star Ruby Barnhill – is the splendiferously precious young heir to the crown of Kandis. The last living descendent of legendary princess Carlotta, Emmy has inherited a magical, albeit totally secret, gift. As only her closest friends – plus Tim McInnerny’s Gregorius the Ghost – know Emmy can talk to her horses. And she has plenty of them. In the royal stables, twenty-four, rainbow bright ponies hang on her words, each a loyal subject and all full of chatter – voiced, as they are, by the likes of Joel Fry and James Anthony Pearson.

When not frolicking about her palace, Emmy can be found riding her lands and causing mayhem for her sketchily drawn cast of supporting characters. There’s Fionnuala (Clare Waugh), the Irish maid, Vincenzo Massimo (Uwe Ochsenknecht), master of ceremonies, and, of course, Emmy’s parents: Queen Karla (Franka Potente) and King Karl (John Hannah). Given that the latter spends the most of his time making spurious cupcakes, Kandis’ royals can only be constitutional.

Perhaps their kingdom is related to Canterlot – of My Little Pony: The Movie fame. Certainly the two share a Dulux prediction and retrogressive assumption that the classic girl’s own pre-pubescent lives on as strong as it ever were. Threat in the film revolves purely around the possibility that Emmy might lose her equestrian talents and have her invitation to the upcoming royal ball revoked. Standing in her way is spiteful cousin Gizana (Game of Thrones’ Bella Ramsey), a jealous sort, with more than her fair share of schemes tucked up her sleeve. Confusing matters, Emmy must face a looming test too. The film is never quite clear on what this is and the intricacies will likely sail widely above its audience’s little crowned heads.

Unlike My Little Pony, Princess Emmy draws its origin and visual style from the best selling book series of the same name. ‘Best-selling’ but perhaps not so well known? Indeed, it is the volition of small time European animators to bring the tales to the big screen, rather than any major player. To this end, the film’s small budget goes a long way and is well played. There’s no question that the emotional resonance and spiritual exploration of Ghibli is lacking here but, equally so, there is little doubt that Emmy achieves what it sets out to do. Admirable messages about the need to allow young girls to own their own narrative are subtle but valiant, well balanced with the metaphorical weight of tonal soft pinks. Emmy is rewarded for bravery and compassion not etiquette. Too right.