It was a dark and stormy night. Let us take you behind the story of Disney’s second attempt to do justice to the beloved book by Madeleine L’Engle…

Meg is the unruly 13-year-old daughter of Dr. Alex Murray – an astrophysicist trying to perfect instantaneous travel through the space-time continuum – who has vanished without a trace.

When Meg’s eccentric neighbour Mrs. Whatsit and her companions: Mrs. Who and Mrs. Which, are revealed to be celestial beings, however, the time is ripe for a trans-planetary hunt to find and save Alex from a mysterious fate.

Aiding Meg on the quest are: her child prodigy brother Charles William and her new school friend Calvin O’Keeffe; together, they will voyage across the Universe facing good, evil and untold challenges.

The entire fabric of space and time is threatened.

It’s an exciting trio of stars that bring Mrs. Which, Whatsit and Who to life, with Oprah Winfrey, Reese Witherspoon and Mindy Kaling ready to sparkle in each role respectively.

Rounding off the all-star adult ensemble, Chris Pine – fresh from Wonder Woman – is once again in need of a female savour in the film, as Alex, whilst the fabulous Gugu Mbatha-Raw remains at home as Meg’s mum: Dr. Kate Murry. 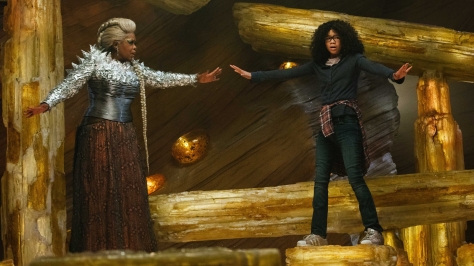 The film is based on the 1962 novel of the same name by Madeleine L’Engle, with Disney having previously produced a TV film of the story back in 2003 (which L’Engle hated). Hoping to magic up some justice for the popular book, Ava DuVernay – the Oscar-nominated director of Netflix’s 13th – has directed the 2018 adaptation, marking the first time a woman of colour has directed a live-action film with a budget over $100m.

Marking her writing-debut on a live-action feature, Frozen‘s Jennifer Lee – the first female director to lead a Disney feature/direct a film earning more than $1bn – has penned the script, having replaced Jeff Stockwell (The Bridge to Terabithia) in 2014.

Ramin Djawadi – the composer of that iconic Game of Thrones theme – has scored the film, whilst a lightness of touch as been applied to its cinematography by Beauty and the Beast‘s (2017) Tobias A. Schliessler.

Watch out too for striking costumes by Paco Delgardo, the Spanish designer of clothing in The Danish Girl and Les Miserables.

A staggered international release – oddly kicking off with the Philippines on the 7 March and concluding with Turkey on the 20 April – will see A Wrinkle in Time land in UK cinemas on 23 March.