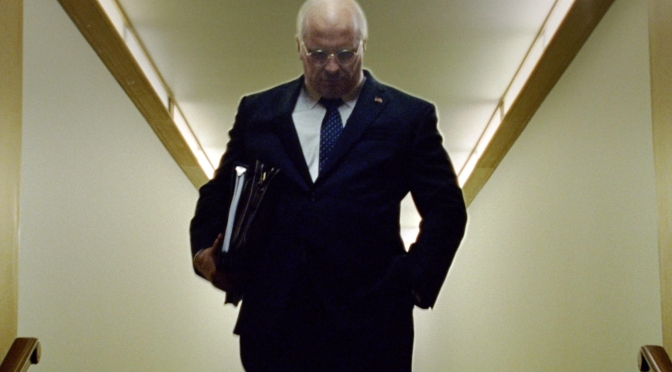 With the ninety-first Academy Awards zooming ever closer into vision, we’ve asked some of #FilmTwitter‘s top bloggers to explain why their favourite Best Picture nominee should come out on top.

Our run through continues today with Ruth – of Ruthless On Film – on Vice. You can follow Ruth on Twitter @RuthlessOnFilm but not before you check out what he has to say here!

I was lucky enough to see the biopic Vice two weeks before its UK release. The announcement that our secret premier was going to be Adam McKay’s new movie was met with whoops and shouts of joy.

What followed was arguably McKay’s best picture to date. If you thought his debut in drama – The Big Short – was good, then you’re in for a treat. Vice is another level entirely.

The trailer alone told you what to expect, hard subject matter but shown in McKay’s signature style, explaining complex narratives in a digestible and humorous way. Here’s why I think Vice should win Best Picture at the Oscars 2019.

Vice doesn’t waste any time in showcasing Dick Cheney’s rise to power. Unlike McKay’s previous attempt at a drama, Vice concentrates more on the story than style.

Cheney is played by Christian Bale in what is his most shockingly transformative role yet. We witness as Cheney ruthlessly screws over everyone in his path, including his mentor and buddy Donald Rumsfeld, to becomes the man we know today.

The man who was always told that he wouldn’t amount to anything uses it as ammunition to become of the most powerful Vice Presidents in American history.

When Bush asks Cheney to be his Vice President, he isn’t exactly keen. A screwd businessman and CEO of Halliburton Co at this point, Cheney isn’t interested in a symbolic role. ‘However,’ he states, ‘if we came to a different understanding, I can handle the more mundane jobs.’ These small jobs turn out to be things like bureaucracy, the military, energy, and foreign policy.

Ever the phoenix rising from the political ashes, Cheney puts his time as White House chief of staff, House Minority Whip and Defence Secretary to good use to play on Bush’s weaknesses and take control of the country. The only thing Cheney won’t compromise on is his family values, or so he’d have us believe. Ultimately, he will use anything in his arsenal to win.

Bale’s Cheney thickens and greys before our eyes, with each year that passes becoming more consumed by power. 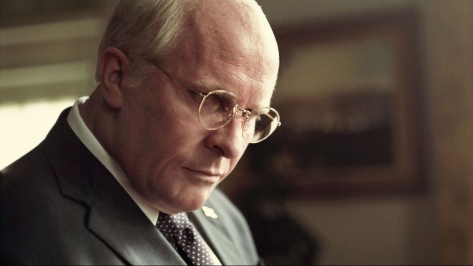 Vice isn’t about glorifying him, as other critics think, but more about telling the origin story of the monster we know today as Dick Cheney. It’s the tale of how he rose to power and was able to get away with all the despicable things he did.

Sam Rockwell who plays Bush is pitch perfect, capturing his affable nature with such ease. Let’s not forget Bush’s laidback character allowed this to happen during his Presidency. Through his inaction the former President was complicit in every action Cheney carried out.

Alongside Bohemian Rhapsody, Vice is the Oscar contender that fared the worst with critics, with some put off by McKay’s distinctive directorial style and bold subject matter. But I would vote for Vice every single time. I applaud its boldness. We need more movies like this now more than ever before.

If The Favourite wins Best Picture at the Oscars 2019, then it shows that we’re all drinking the awards Kool-Aid, voting for a movie with little substance and the occasional chortle.

Yes, the movie theatre is about escapism, but it’s also about coming face-to-face with the past and seeing it without rose-tinted glasses. McKay’s Vice cuts the sh*t and I’m here for it.

Do you agree with Ruth? Read our review here and let us know your thoughts in the comments!

Don’t forget to check out Plain Simple Tom on why A Star is Born should win, Hamish on Black Panther, Chris on Bohemian Rhapsody, Dan and Nancy on Green Book, Lolo and BigJ on BlacKkKlansman and Steven on Roma too.